Glue It Down with Reverb

Today I'll focus on the sixth bus of my personal reverb mixing setup. As I told you before, this bus is aimed at producing the so-called "glue" effect. In other words, the more or less signal you send from each of the tracks towards this bus, the more coherent the overall mix should sound.

Before we begin I must confess that, personally, I seldom use this bus. I usually get this famous sonic cohesion between the different elements of a mix in a different way: by creating a realistic sense of space, which is something we'll see in the next article, or with other techniques that we'll see later on as well. That said, whenever I notice a lack of "glue" between the tracks I do not hesitate to resort to this bus. 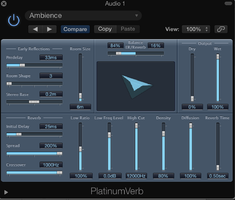 If you have been paying close attention, you might recall that I mentioned the ideal candidate for this task back when I was describing the different reverb algorithms. Does anybody remember? Anybody? Right, Ambience algorithms. This type of algorithm is unparalleled when it comes to creating a sonic atmosphere and, thus, coherence, without providing any sense of spatial placement. That's why I recommend you to use this sort of reverb to get that glue effect without later on having to worry about spatial interference with the last three buses.

Regarding the preset choice within this family, you obviously need to make sure it matches the emotional aspects of the song in question. But this is a topic we've discussed at length for you to be able to make the best decision.

Generally speaking, the chosen preset will have an adequate pre-delay, but do not hesitate to modify it if you notice that the reverb has a tendency to mess up the overall depth of the mix.

As usual, the decay ought to be set according to the beat of the song. For an ultratransparent result, in other words a very subtle sensation rather than a stylistic effect, lower the decay value, but always respecting the groove of the song.

You should then work on the spectral aspect of the reverb to make it as discreet as possible without it ever interfering with any other instrument.

As for the amount of signal from each single track that I send to the glue bus, I use a technique consisting of two stages. I start by soloing this bus to listen exclusively to the reverb signal. I then set each track send to get a more or less blurry "mirror" of the sonic puzzle I envisaged at the beginning of the mixing process. Finally, I remove the solo to listen to the whole mix, I bring down the fader of the glue bus and start raising it little by little. As soon as I hear the reverb I stop and go back a bit. This usually results in a perfect transparency: you can't tell a thing when the bus is active but you can easily tell when it's muted. Once you achieve this, you have reached your goal and you can move on to the next stage ─ but you'll have to wait for the next article for that!