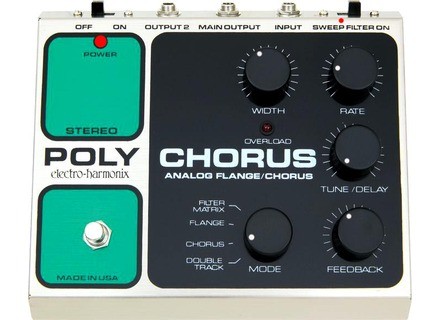 View other reviews for this product:
The Electro-Harmonix Polychorus is an analog stereo chorus and flanger pedal designed for use with electric guitar, but certainly suitable with other electronic instruments. However, I've only used it with an electric guitar, so this review will be focused on this application, which is okay as this is the original intended use of the pedal anyway. The pedal's characteristics are very simple, with two 1/4" outputs and a single 1/4" input. It comes with it's own power supply, so you don't have to worry about finding the right power for it, and if I'm not mistaken it will only work with an Electro-Harmonix made one anyway (as is the case with any EH pedals). The pedal isn't rack mountable as it is a stomp box.

The configuration of the Electro-Harmonix Polychorus is generally pretty easy to follow, and at the same time the pedal allows you a very good amount of control over your tone. The pedal features a mode knob, which allows you to choose from four different modes, including chorus, flanger, double track, and a filter matrix. It then has knobs for width, rate, tune/delay, and feedback, in addition to a filter sweep button which can be turned on or off. That's pretty much all that you need to know, but if you feel you don't understand what the parameters do, it's probably a good idea to have the manual around anyway.

The different tones possible with the Electro-Harmonix Polychorus is certainly where the pedal makes it's money. Like just about every Electro-Harmonix pedal I've used, it boasts a very clean sound quality that is versatile across the board. I've used the pedal in the studio with a Fender Telecaster and a Fender Blues Jr. amplifier, miking the amp with a Shure SM57. While the chorus tones are definitely where it's at on the Polychorus, the other modes are awesome to have, as the flanging tones are very respectable to say the least. I also really like the double track mode which allows for some more subtle, but very interesting effects as well. In general, the Polychorus has a very clean tone without any added noise.

The Electro-Harmonix Polychorus is definitely one of the most complete chorus/modulation pedals out there that I've used. I'm a huge advocate for pedals made by Electro-Harmonix, as I love their vintage look and sound in our modern context. While not the cheapest chorus pedal available out there, if you're someone who uses chorus and other modulation effects a good deal and want something that will give you versatility, look no further than the Polychorus pedal.
Did you find this review helpful?yesno
Cookies help us improve performance, enhance user experience and deliver our services. By using our services, you agree to our use of cookies. Find out more.