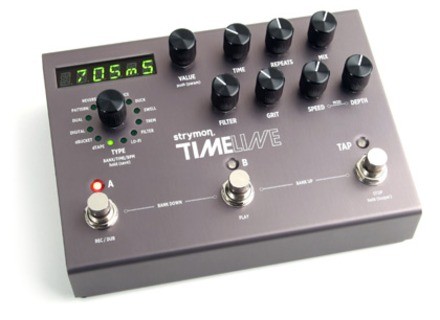 «  Not terrible by the bias of sound aesthetic that provides »
3

Buy this productView price information >
View other reviews for this product:
12 delays so what to do with all the settings mix / filter / grip / deep / speed .....

maj via midi editor Usb not!!

Yes, say it is logical after the method of menus in menus and sub-sub menus such u nmulti effects.

The effects are pretty effective, but what is striking is the ability to prefabricate a characteristic style Strymon s icaractéristique it obscures COMPLETELY Grain upstream (amp and scratches) in a mid / treble balance and devoid of low (in contrast to the time factor but less defined ds top spectrum)

It is a little pinched in tanto down mid (with added implausible resonances), sometimes pinched or détimbré at the top and a lack of consistency in the classical modulation delay.

Overall if the delays are good, the grain and systematic tonal balance too characteristic not robust enough that I have come to appreciate not even annoy me.


non alas, I am based on the global concert praise, but his particular sound balance systématqiue eventually get me through the eyes

With experience, I turn to more environmentally friendly models ESPECIALLY grain such as Empress susperdelay (a little less quality rehearsal), the T rex replica for the quality of its repetitions and musicality despite some analog which is also the digital Aoustic resarch terrible ad4096 but also a bit crazy and the maxon AD999 pro or even as worthy ECHOREC crossed a certain musicality

If the Strymon is not free from defects in concert global praise and is better than lambdas brands and mxr Well, there is incontestably better, generating a bit of a fad it seems.

But it is true that Tc 2290 or Your Pete Cornish then we can say sacred musicality and transparency, Tl is a stopgap, and when it sounds poin, t need to make maj which the latter are not necessarily better elsewhere ....

So no I sold it, it is not to take it back and I have listed above closer to what I held.
See the source
Did you find this review helpful?yesno
Cookies help us improve performance, enhance user experience and deliver our services. By using our services, you agree to our use of cookies. Find out more.