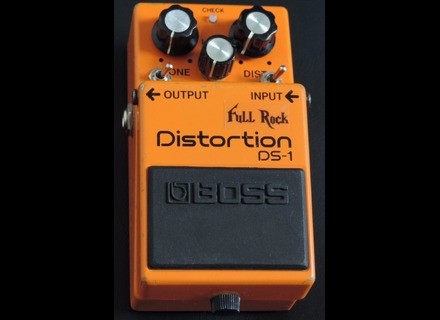 View other reviews for this product:
(Excerpt from manual)
- The next tone switch:
This switch plays on how the signal is clipped. There are three positions:
LED, germanium and clean boost.
The position of germanium:
Easily recognizable by its very low output level compared to
other. The sound is close to the original but gives a little more compression. Rather
for high rates of gain.
The central location clean boost:
Here the output level is very powerful! Attention to the ears! Rather, the rate
low gain, this setting allows you to use the pedal as a boost of course.
Usually on a clean channel or a little crunch already. But also as such
for blues sounds.
Led the position:
The difference between LED and clean boost is mostly felt at high rates of gain.
They allow compression and a different attack. The LED gives a lot of
trunk and power while remaining in its slightly more compact than the clean position
boost.
- The Switch side Dist:
At two positions, that it reduces the rate of overall gain of the pedal. By
At the same time makes the sound fatter. You have to find your settings, combinations
are many! Msm would recommend using the rather low gain position on
positions led and clean boost.

Familiarize yourself with the various switches that change the pretty but we give it quickly.

I had the original DS1 I had found screaming at will.
The mod really changes the.
Already much less background noise and that it really matters for a disto.
Corrections are more effective sound.
Otherwise, more consistency in safe and sound, it was really nice and warm distortion.

The switch 3 position really brings very different colors from one mode to another position called "clean boost" is fine too high gain (to give to his fat). Otherwise, the one I prefer the LED position.

For cons, I am skeptical about the switch to lower the amount of distortion and give his censer overdrive. We keep a saturation distortion even turning down the gain and for me it is not really usable in overdrive, the sound becomes "soft" and not dynamic. I do not use it almost like that and prefers to use a true overdrive for that use.

Tried on a bass, it sounds great and food is not low frequencies.

I bought there a year and a half.
Although this is not my main distortion, I really appreciate its versatility.
A mod should be done on the DS-1 and I wonder why Boss does not include the serial.
See the source
Did you find this review helpful?yesno
Cookies help us improve performance, enhance user experience and deliver our services. By using our services, you agree to our use of cookies. Find out more.