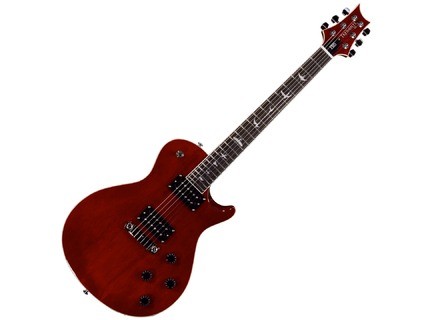 View other reviews for this product:
Mark Tremonti is the Alter Bridge/Creed guitarist and he has been a pretty loyal PRS player for a few years now. He is one of the most well known PRS players in modern music so he has a few signature models to his name. This is the SE version. SE PRS guitars are made overseas but still retain the great feel and sound of their USA made counterparts. This guitar has a mahogany body with a mahogany set neck. The fretboard is rosewood with 22 medium frets. The neck has PRS's wide fat profile. The neck is also PRS's unique 25 inch scale. It has PRS in house pickups front and rear. The controls are unusual for a PRS since it has dual volume and tone controls. The bridge is a PRS wraparound design which they use on a lot of their guitars. The finish is a super deep black. Guitars dont need to come in any other color.

PRS guitars have a unique feel to them. This is mostly due to their wraparound bridges and their unique scale lenghts. The wide fat neck isnt as scary as it sounds. It is no where near as fat as a 50s Gibson. It is fatter than the wide thin PRS neck that I love. I find they are making less and less models with the wide thin neck. They have managed to perfect their simple wrap around bridges. This combined with the unique scale lenght gives these guitars very good intonation although if you are use to Gibson wraparound bridges you may not think so. The fretboard is fully bound and feels nice. The radius is pretty flat but it is not a total shredder. The guitar feels nice and solid.

PRS throws in some decent pickups into their SE models. You can really tell everything on a PRS guitar is matched perfectly with every other part. Every part works together to get that unique PRS tone and feel that PRS players always brag about. I believe Tremonti uses Seymour Duncan pickups in his personal guitar so PRS has tried to get that sound with some of their stock pickups. The bridge pickup is pretty hot and open so you can get good over driven sounds. It has a lot of grunt to it. It is not the best pickup out there but by no means is it terrible. The bridge pickup is nice and solid for metal or classic rock. It does not clean up very well but that is common among high output pickups. The neck pickup compliments the bridge pretty well. It is decently hot but provides a smoother sound. This smoother sound lets the pickup get a good clean tone and also gives you lovely lead tones. Smooth leads just fly out of the guitar and you an really shred on it.

Mark Tremonti is one of the most popular PRS players nowadays and so he has a few signature models out. Since most of his fans are probably younger or working musicians the SE model provides them with a Tremonti signature that they can afford yet still has all the looks and feel of the real USA made model. This guitar with a swap of pickups can perfectly nail the Tremonti tone so this guitar is a great value because you can get this guitar for around 600 bucks while the real Tremonti signature is like 2600 bucks and even that one does not come with the real pickups he uses. So you can get this SE and spend a couple hundred bucks in pickups and have a closer Tremonti tone than what the USA model provides.
Did you find this review helpful?yesno
Cookies help us improve performance, enhance user experience and deliver our services. By using our services, you agree to our use of cookies. Find out more.