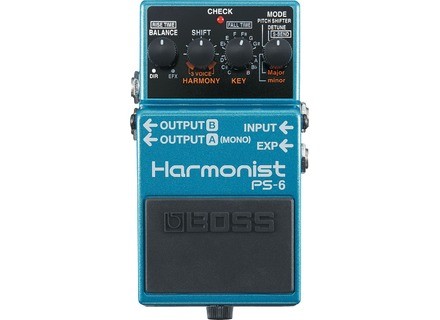 Buy this productView price information >
View other reviews for this product:
The Boss is perhaps one of the most bloated of the brand: 1 in, 2 out, 1 expression pedal jack, four knobs which one can select a mode from five different
- Harmonizer in major scale
- Harmonizer in minor scale
- Pitch shifter
- Detune
- S-bend

The other 3 knobs have their respective functions change depending on the selected mode.
Should there be a shortage, it would be a stereo input. I shall have a well-bonded delay effect on the notes harmonized (I think it already exists on an old Boss model, the PS-3 I think).
Otherwise, it's perfect.

The configuration is simple, but it's enough to spend a few hours to explore all possibilities of the pedal. If I have tested up and down, I focused on two or three sounds. The settings are three in number, it is easy to change between these two titles.
The manual is very clear and well done, and I urge everyone to read it before you buy this machine, as it provides information on some well-related functions, such as using the expression pedal.

It is difficult to objectively evaluate this pedal. Personally, I bought it without conviction, yet without being a key part of my set, I am very close to part with it. Rather than detail all the possible modes (notice should be 4 or 5 times longer for that), I will speak of the two sounds that I use mainly:
- A whammy effect to the higher octave. The guitar sound is quite distorted, but frankly, I see it more as a quality as a defect, it really helps to go in the sixth dimension

- A pitch-shifter effect to the fourth or fifth, or possibly an octave. Unlike the harmonizer mode, the effect of pitch is polyphonic, so you can play chords. This mode allows a game a little "dirty", while the harmonizer mode, monophonic, must be approached with a set of otherwise clean stalls not necessarily very musical. In this mode, I set the effect level low enough to magnify the sound while maintaining a natural grain. If the level of the effect is mounted beyond 11am-12pm, I think we lost a little natural (except maybe if we play with the simple octave) and means that it is a digital effect.

In both cases, I do not use the expression pedal: for the whammy effect, you can set the time to rise and fall, and I find it rather well. Set very long, you can have sounds really crazy. For the purpose Pitchshifter, I'm not interested really control the height of harmonization with the expression pedal. That said, to have a connected, it works really well.

Another thing: the bypass is really very good. Clearly, in the direct competitor, the Whammy, the bypass is poor. With the PS-6, it is not, and I tend to believe that the bypass of the latest pedals Boss has been improved over older models.

As I said above, I have no way of comparison with other pedals of this type. I guess the Pitchfactor Eventide sounds better and makes it a lot more, but its price and size are prohibitive for me using this with such parsimony. Personally, I utiise to bring a truly amazing effect on my game, I do not care whether it sounds natural or not. Try before you buy, but I personally do not regret my choice!
See the source
Did you find this review helpful?yesno
Cookies help us improve performance, enhance user experience and deliver our services. By using our services, you agree to our use of cookies. Find out more.