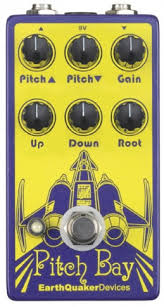 Akron, Ohio, based EarthQuaker Devices has made a name for itself in the boutique pedal world since it started out back in 2004. The brand is coming out big for its tenth anniversary and has announced the introduction of a couple of new pedals during the Winter NAMM 2014, one of which is the Pitch Bay, a three part polyphonic harmonizer and distortion generator.

The Pitch Bay features two voices of adjustable polyphonic pitch shifting, one above the root and one below, each of which can be adjusted by stepped semitones (1 to 12 semitones). Plus, all three voices (Pitch up, Pitch down and Root) can be blended, cut or boosted independently.

Check out this video preview: