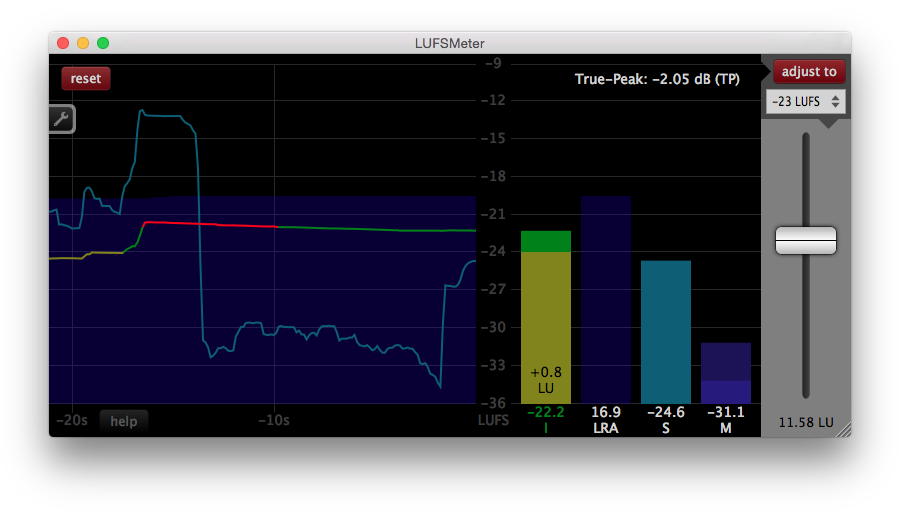 Other monitoring calibration software from Klangfreund .

Let me introduce you to LUFS Meter, a downright clever plug-in that can make life easier to anyone taking the "Loudness War" seriously. And I hope there are many of you out there, considering the pains Audiofanzine goes to trying to make you aware of the issue...

Available in AAX, AU, VST and VST 3 format, in 32 and 64-bit versions for Mac and PC, LUFS Meter is the first plug-in by Swiss software maker Klangfreund. The installation and authorization (on up to three computers) are a mere formality, so I’ll dive right into the heart of the matter at once. As its name implies, LUFS Meter allows you to visualize the level of your recordings using the LUFS (Loudness Units Full Scale) unit. This unit of measurement based on actual perceived loudness has become of paramount importance in recent times, not only for broadcast, but also for music, considering that the main music streaming services are adopting it little by little. For more info on this topic, refer to this chapter of the excellent series dedicated to the “Loudness War” written by my colleague Sleepless.

But to get back on topic, the plug-in’s GUI displays the following values with a bar graph:

In addition to this, there’s also a True Peak measurement of the signal in dBFS with a precision of two decimals, as well as a graph showing the evolution of all these values over time. Do note, however, that this timeline displays only the last 20 seconds by default, although you can change this in the plug-in’s preferences (from four seconds up to four hours!). Overall, it’s as clear and functional as it gets. Especially since you can resize the interface and customize the display at will (with different colors and sizes for each section) via the plug-in’s preferences, which can be easily accessed with a simple click on the monkey wrench on the top left. You can obviously save your preferences as presets to be able to switch quickly from one display mode to another depending on the situation.

The only downside up to this point is that the plug-in doesn’t come with a user’s manual. I looked everywhere and couldn’t find a trace of a PDF…Fortunately a switchable contextual help (with the Help button on the bottom left) shows the basics you need to know about the plug-in’s different sections.

That’s all very nice and all, but nothing really to write home about. This type of plug-in already exists and the LUFS Meter doesn’t seem to add anything new that sets it apart from the competition. And yet…

The devil is in  the details…

During mixdown, after the inevitable gain-staging phase, some sound engineers like to make a quick premix just playing around with the levels to know where everything’s going. Some even go to the extent of applying the resulting gain variations to the tracks in order to have a premix with all the faders set to zero and, thus, benefit from a better fader resolution during the actual mixing stage. The reason behind this move is that, as you have probably already noticed, the level of the faders isn’t linear and the region around unity gain is, obviously, the one with the best precision.

Why the hell would I bring this up in this review? Well, it just so happens that the LUFS Meter does this automatically! And it couldn’t be easier to use. You only need to place a plug-in instance on the desired track, start playback from start to finish, choose a target LUFS level, click on “adjust to” and that’s it. LUFS Meter will then adjust the track’s gain depending on the settings to obtain the target level without you ever having to touch the track’s fader. And the beauty of it all is that you can sync the “reset” and “adjust to” functions of several plug-in instances. This means that you only need to insert a LUFS Meter with the desired target level and the “sync” function activated on each of the tracks of your mix, playback the entire song, click on “adjust to, ” and voilà! Your premix is done in less time than you can say it. Here’s a video explaining how it works:

I obviously tested it every which way possible. And I must admit that the results are truly stunning. Judge for yourself:

The first clip is the track with all faders at unity gain after Gain Staging, without any EQing or compression. For the second one, I used an instance of LUFS Meter on each track to create a premix with a target level set to –23 LUFS. The Master level of both clips was set to –16 LUFS, with the help of the plug-in, to be able to compare them at the same loudness. Quite convincing, isn’t it? Personally, I think it’s a very good starting point for the mixdown stage.

Once again, the result seems more than satisfying, especially considering that it only took me a couple of minutes, whereas a premix by hand would’ve taken me a quarter of an hour. Just a couple of remarks. This time around, the target level was –30 LUFS for all tracks, except the vocals which I set to –23 LUFS because I like to start mixing with the vocals upfront.
I must point out a small detail regarding the use of the plug-in, though. Bear in mind that, afterwards, when you add any processing (EQ, compression, etc), you’ll have to do it pre-LUFS Meter, otherwise you won’t be able to work with the right gain structure.

What could you not like about this plug-in? Not much really. Although I think access to the sync function isn’t too practical. You actually have to rummage in the preferences tabs to activate it. I would’ve preferred a button directly accessible on the GUI. Furthermore, in my opinion, it lacks a global bypass function to be able to quickly disable all synced instances of the plug-in. Fortunately, a little birdie told me the software maker is working on it.

CPU resource usage varies a lot. On my machine (a late 2013 Mac Pro with a six-core 3.5 GHz Intel Xeon processor), one instance uses about 0.12% when a signal is present ─ even if it’s absolute silence ─ and rises to 0.47% when the channel is “empty”… But you can significantly reduce the CPU consumption, down to 0.04%, toggling off the True Peak display. And you can even bring it down to 0.01% by pausing the display with the respective button.

To finish, a nice little trick the software maker shared with me: Besides the “adjust to” function and the sync for the premix, it can also be used to assess any given processing at equal loudness, which can come in very handy. To do that, you only need to duplicate the track in question, insert a plug-in instance on each of them and sync them with the same target level. Now process one of the tracks, but not the other one, obviously. Once done, start playback, click on “adjust to” and you’ll be able to compare both tracks without being biased by any differences in loudness. Not bad, isn’t it?

I must admit that Klangfreund has pulled off a very useful plug-in that has utterly seduced me. Granted, it doesn’t look much at first but it can make you gain lots of time in the long run, while at the same time helping you fight the Loudness War. The software maker offers two types of license: the Full version, for $59 plus tax ($49 with introductory discount) and the Discounted version, which is very reasonably priced ($24 plus tax; $19 with introductory discount), although it does have a couple less features, like limited syncing to maximum six instances, the absence of True Peak, etc. As usual, I invite you to download the demo version and try it out for yourself.