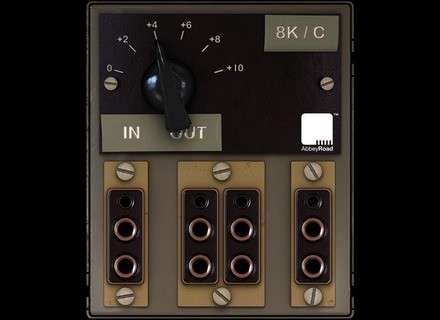 View other reviews for this product:
The Abbey Road Plug-ins RS 135 is a really simple, filter plug-in that is part of the Abbey Road Plug-ins Brilliance Pack. This comes along with two other plug-ins in this bundle - the RS 127 Rack and the RS 127 Box, both of which are similar sort of filter plug-ins. This one is probably the simplest of the bunch, however. As far as getting the plug-in up and running is concerned, I wasn't involved in the process since I don't own this plug-in pack and have only used these plug-ins at the studio where I'm working. I can however speak about the extreme ease of use you're getting with this plug-in and the full bundle. This is just a one band filter that is fixed at 8 K. So while you're not really getting any control, this is really meant for adding a bit of high end brilliance to your sound. A manual is surely not necessary...

We're running the Abbey Road Plug-ins RS 135 and the full Brilliance Pack at the studio where I work on a few different Pro Tools HD systems. Running it on this system isn't a good judge of how much processing power plug-ins will take up, as they can handle pretty much anything since they're HD systems. However, I'd definitely be surprised if many users had problems running this plug-in since it's such a simple one.

Although limited in what it can do, the Abbey Road Plug-ins RS 135 is great for adding a little bit of brightness to your sound. It's a really warm sounding plug-in, which is really the main reason I like using this for boosting at 8 K rather than using a more traditional parametric or graphic EQ. I love using this on guitars mostly, but even for vocals if I feel the timbre could use a little bit of high end color. This and the other plug-ins in the brilliance pack are great for both mixing and mastering, so definitely check them out if you're looking to add some new high quality plug-ins to your DAW.
Did you find this review helpful?yesno
Cookies help us improve performance, enhance user experience and deliver our services. By using our services, you agree to our use of cookies. Find out more.