Today's article is somewhat special but serves to illustrate perfectly the advantages of splicing into episodes this sort of series.

The fact that we have a comments section where we can all interact wouldn't be as useful if Audiofanzine had decided to publish this series in a massive but "static" and dull piece. So, here's a special issue, completely improvised but which I nevertheless consider absolutely necessary at this stage of the guide.

Let me begin by recalling something: this recording guide is part of the "Getting Started" section of Audiofanzine. In this regard, it is aimed first and foremost to people just starting out. The goal is make them as knowledgeable as possible without the slightest pretension of making them experts.

Although, in the end, the "level" of the reader doesn't really matter because no one is all-knowing and it's always interesting to review the basics. In music, as in every other field, we can all learn or relearn something every day.

I know I sometimes seem to just state the obvious and/or sound like a broken record in the eyes of the most experienced among you, but that's the whole point of this guide. Every newbie should know the basics before he or she can move on to bigger challenges. Imagine the boredom of someone studying advanced maths taking an elementary school lesson on multiplication. Would it make any sense to skip the ABC of maths for the sake of this one person, at the risk of losing along the way all other students taking the lesson? As usual, I'm exaggerating things, but I'm pretty sure you get the point.

Another particularity of this series I would like to point out is its universal character. Its object is not the recording of this or that instrument, but rather recording in itself. In other words, what I'm trying to do here is explain the stage of capturing sound within the framework of phonographic production as a whole. And I might be wrong, but I don't think guitar players are the only ones using guitars in their compositions, nor are drummers the only ones interested in recording drums. Not to mention multi-instrumentalist composers who might not master any particular instrument. Hence, I think it's useful to go through some basic principles regarding each instrument so you can grasp better the overall concept of audio recording through these examples. 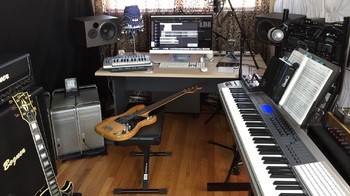 There's a third point I would like to clarify: this guide was conceived with home studios in mind. I've obviously included some lessons from my experience in professional studios, but the core of it comes from my almost 30 years of home recording – I somehow feel older right this moment. Anyway, my idea is to use as few means as possible in order not to disappoint people on a tight budget but, at the same time, maximize the main advantage of a home studio: the amount of time available. So, yes, certain processes take lots of time in the beginning to understand better what happens and how to get optimal results under more or less "precarious" conditions. However, this "waste of time" will make you gain time in the long run. Trust me! Furthermore, I do not claim to have the ultimate method for anything. I just explain a way of doing things that works for me, and it's up to you to try to do things the same way or not, to choose a few tricks and suggestions and integrate them in your workflow, etc.

Finally, I would like to stress one last fact: this guide was conceived as a series. This means that even if I repeat some things, I never start from zero when I begin a chapter dedicated to a new instrument. The drawback is that it could prove somewhat counterproductive to read isolated articles because there might be concepts that you need to understand in advance and which we have most probably detailed somewhere else, like a previous article of this series or even some of your comments in the forums.

That's it for today, In the next article will retake the recording of electric guitar. Have a great weekend!