In this episode we'll start discussing the recording of drums with what is usually called the Mono Room track, which is much more important than it seems...

As its name implies, Mono Room refers to the mono recording of the room when you are tracking drums. And it's no mere coincidence that I decided to start this chapter addressing it. It not only plays a crucial role in the sense of depth when your record a kit with several mics, the Mono Room track can also be a solution when you have only one mic or track to work with. I know, right now you are probably thinking this can only be a last resort option for dirt-cheap productions, but it sometimes is a voluntary choice! As an example I'll cite Amy Winehouse's You Know I'm No Good. The drums were recorded by Gabriel Roth (Daptone Records) with a single Shure 55 mic*. And it wouldn't surprise me that Roth did the same with this spellbinding instrumental track by Charles Bradley where the drums are recorded "old school" style. This way of doing things obviously doesn't provide the same freedom as a recording with several mics but, on the bright side, it will spare you any phase problems!

So, in short, Mono Room shouldn't be taken lightly.

As I explained in the previous article, we couldn't record at my place. So here's a brief rundown of the technical conditions of the recording. 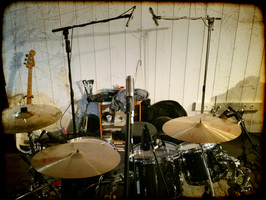 The conversion is done with a Soundscape Ibox 64-MADI-TA interface. Regarding mic pres, we sent everything into two analog consoles: a Soundcraft 3200 and an Amek TAC Bullet. We strove not to push the preamps too hard to try to have the "cleanest" sound possible. We obviously didn't apply any EQing or compression during tracking.

For the Mono Room we chose a Royer Labs R-121 ribbon mic. Since our goal was to get a take that gave some depth to the drums without blurring the overall result, we placed the R-121 pretty close to the kit:

Here are the results of the two different patterns:

Later on we'll see what this track adds to the rest, once mixed with the other tracks. In the meantime, and even though this is outside the scope of this series dedicated to recording, here are some examples of what you can accomplish with a Mono Room take during mixdown:

For the record, the only processing applied are a bit EQ, some more or less aggressive compression and a slight reverb. As you can see, you ca achieve quite a lot with it. 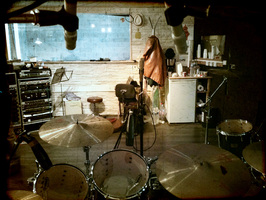 Not everybody has a R-121 at home. But still a mid-range ribbon microphone ought to do the task perfectly well. Why a ribbon mic? Well, quite simply because the frequency response of this type of microphone is usually pretty "smooth" in the high end, which will avoid you ending up with a very aggressive and very upfront cymbal sound. Furthermore, the figure-8 polar pattern of such mics allows you get a nice depth of field by capturing a good dose of the room. Do note that you can play with the tilting of the mic to balance the lows/highs, while at the same time you can change the distance to the drums to play with the depth/precision of the take.

Another point I'd like to make is that when you record drums with a single mic you can also use a large diaphragm dynamic mic with cardioid polar pattern to get a "tighter" and more accurate sound. And to get a more punchy sound you could place the mic right above the kick's beater with the capsule pointed at the snare. This way you'll get less lows but the kick/snare combination will be quite punchy and way upfront in relation to the rest of the kit.

To finish, always bear in mind that the placement of the mic is crucial when it comes to the Mono Room track. So take the time to test different positions in order to find exactly what you want.

*Doing a quick search online it seems that on this Amy Winehouse track they used an RCA 77 DX together with a Shure 55, both placed almost at the same position. The sound of the album is probably the result of the mix of these two tracks with some snare and kick samples. The addition of samples (layering) is pretty common in the production of drum sounds, which is why we'll discuss this technique later on.