The importance of good tuning

This week I invite you to discuss the importance of tuning in a recording situation.

In and out of tune

I know it seems an insignificant topic, but it's not uncommon for me to receive tracks to mix where certain instruments are out of tune. And I'm not talking about some wrong notes here and there, I'm talking about the instruments being completely out of tune. And it's true, the technologies available today certainly allow you to limit the damages, with software like Celemony's Melodyne. But then again, the fact that modern medicine can help lessen the damages produced by a broken bone doesn't mean you should go around riding a bike with no hands risking breaking your arms, does it? You know the saying: An ounce of prevention is worth a pound of cure! With this in mind, I strongly advise you to check the tuning of all the instruments before any recording, and before every session, even during pauses of the same session. And yes, this applies to all instruments. When people think about tuning, they usually think about guitar and bass, neglecting the rest. But regardless of whether it's the drums, a violin, a piano, an ukulele, a clarinet, or a can of sardines, anything can and must be tuned(*).

I know that a guitar can never be perfectly in tune but you can still rock 'n' roll, and that a good musician can play just as well with an out-of-tune instrument, etc. But let's face it, while a dubious tuning may be able to pass the test during a live gig due to the energy of the performance it is precisely because of the live aspect of it. It's an ephemeral performance and both the performer and the listener are there for the moment, there's no going back. But if it's a recording, the listener can listen to the song as many times as he or she wants, which makes the imperfections more striking. Besides, I'm pretty sure that if you were to ask one of those musicians who's able to adapt to any circumstance, they would all prefer to play an instrument that's in tune. 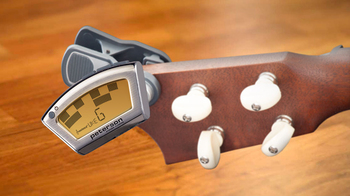 And there's also the times when the songs feature only one instrument. In such cases you might think relative tuning is more than enough, like a guitar whose six strings are tuned to each other, but not to the standard concert pitch (440 Hz for A above middle C). But people who have perfect pitch might think otherwise because listening to your masterworks will be a torture to them. Or imagine you have to overdub something due to a minor issue. Without a fix reference, like concert A, you will have a hard time trying to achieve the same tuning. Hence the makeshift fix won't be enough, especially if it's a one-instrument track. Which means you would have to record the whole thing again. Doesn't sound too good, does it?

Another issue I would like to raise is the coupling of acoustic and electronic instruments. The latter are, in theory, always in tune. Which basically forces you to tune any acoustic instruments you wish to use with them. And even more so with virtual instruments. And since the use of VSTis is very widespread among home studio owners, you have no choice: tune your instruments!

Finally, if I insist so much on this point is because it's much easier to work with instruments which are in tune during mixdown. So why not make your life easier from the beginning?

(*) Before anybody starts complaining about the falsehood of such an "authoritarian" statement, let me just point out that this is indeed more often than not the case. And yes, granted, there are exceptions beyond "exotic" or "wild" musical styles, just take the honky tonk piano sound so common in modern productions, for instance. But I hope you understand that this falls out of the scope of our discussion here today.