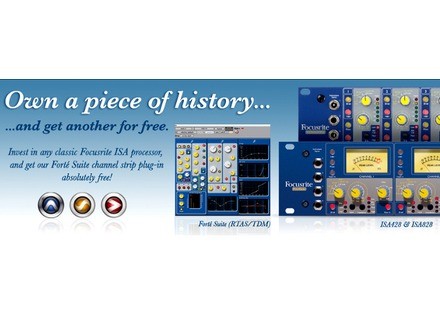 Focusrite are running their “Forté4free” campaign, offering their Pro Tools (RTAS and TDM) ISA channel strip plug-in, "Forté Suite", worth $599, free of charge with every hardware product from their ISA range, including the new ISA One.

Utilizing virtual vintage modules, Forté Suite continues where D2/D3 left off, according to Focusrite, bringing the company's ISA sonic signature to every Pro Tools platform (HD, LE and M-Powered) through modeling of the ISA110 EQ and ISA130 dynamics processors (including compressor, de-esser, and noise gate), the key modules from the acclaimed Focusrite Forté analogue console.

Included in the hardware range are the ISA428 and ISA828, 4-channel and 8-channel mic-pres, the ISA430 and ISA220 channel strips, and the recently-launched ISA One, a single-channel microphone pre-amplifier with Independent D.I.

Every ISA unit features modules from the aforementioned Forté Suite console, the foundation of which is the ISA mic-pre. The topology of this mic-pre has never changed, except for the addition of a variable impedance circuit, the company says.

The “Forté4free” campaign runs from June 1, 2009 until August 31, 2009.  Forté Suite authorization code is claimed directly with the local exclusive Focusrite distributor upon proof of purchase of any ISA hardware unit.