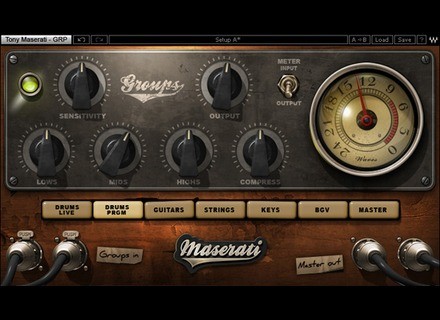 Buy this productView price information >
View other reviews for this product:
Tony Maserati is one of the top music engineers and producers. He's done stuff from the Simpsons to Tupac and nearly everything in between, but his major focus tends to be on the more R&B/rap/rock side of things. Finalizing mixes can be a huge pain, and for a plugin to have everything packed inside of it is quite a task. The plugin has knobs for sensitivity, output, lows, mids, highs and compress. There are also buttons for drums room, drums live, guitars, strings, keys, background vocals and master. To use this, simply enable it on your master buss, and you're good to go. I've never read the manual, so I can't comment on that. However, this plugin is fairly straight forward and shouldn't cause to much of an issue for first timers.

Trying to make a special master buss finalizer plugin can be quite a big task. While my favorite is still iZotope's Ozone, this plugin doesn't do too bad of a job. I've used this with my power metal band without an issue. It doesn't really work out too nicely for my death metal bands, but that has to do with the way it processes everything; it's just a different approach to mixing that doesn't seem to really work for that genre.
Did you find this review helpful?yesno
Cookies help us improve performance, enhance user experience and deliver our services. By using our services, you agree to our use of cookies. Find out more.