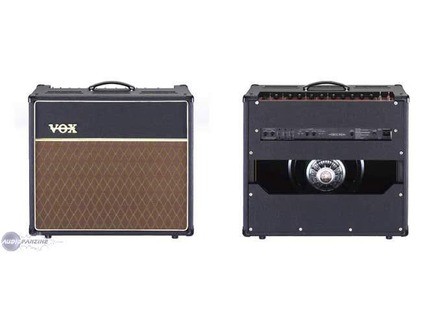 On the back of the amp:
-Connection for external speaker impedance switch with
-Effects loop
-Switch to rglage bias (22W or 33W)
Rglage-switch to "vintage" or "modern"

So the opening of the box, we feel the quality finish of the amp is exemplary. (And yes, it's not because it's "made in china" that is forcing many months!)
Then you look a little bte, and even when there s'apperoit lot of knobs and switches is a bit Drout and we do not understand what to they serve. So to get it right, you open the record. Surprise! it is in French. It's quite enjoyable to read. It described a fawn-friendly with a touch of humor.
After all-inclusive, one branch, and sounds!, Even with all the knobs of the mini rglages.

Normal-Channel:
This channel is for clean sounds. Trs few adjustments. Volume, master volume and shine.
The sound is warm trs, trs Dfine well, good bass. A super clean sound! I love it.
We just have fun with trmolo, it's really not bad. Looks like "kill bill"

Canal-top boost:
So this channel is intended for the distortion. There crunch more easily. But be aware that this amp is not for the large distortion of nags.
For the distortion, you have to push the craft. And 30W in class A, hard! So you put the volume knob a background, we drop the master volume and it s'clate. But watch the ears!
On this channel, the legalization becomes active, so we just play bass and treble.
For now I could not test this config too. I opt for another alternative, in order to have a larger distortion and a lower volume. I took a bulldog distortion pedals Vox Cooltron, plugs into the normal channel. And it's really good, you get good sound pchus, just the Marshall JCM 800. It's not easy to play AC / DC, Metallica (especially the early albums). APRS you to play on the SETTING THE pedals.
Basically, it's that happiness!

Small update of 26/01/06:
I've done more testing on the top boost channel, and it is ... woah!
Master volume and lower back (not to pter windows!), The distortion is simply hell!

It's only been a week I possde this amp, and for now I do not regret my choice. In fact, I bought a dpart Engl screamer that I kept only 10 days. The sound does not please me at all, too modern, too loud (it's a personal opinion). So I went to the store and took the Vox AC30cc instead. And I'm finally happy with my sound. This is vintage trs, trs hot. It is up to its reputable.
So tell me some "but not the real era of the AC30!" I our answer "yes so what is in the same spirit sound quality even more and it is more convenient because it can rev well be used to house, as it possde a master volume, unlike its prdecesseur. In fact Vox has taken everything good in the old silent AC30 and made some amliorations. Why this generous!
With a good distortion pedals in, we get to trs good feedback, noise has a relatively reasonable.
on the other hand, it's not for the metal. I also like the metal, and can be one day I would take another amp for a fact, but even when I would keep it up! Each of its specially. Finally I like the amps not too versatile, because there will necessarily be a compromise.
This amp is a marvel. For less than 1000 euros, you have an amp legends.

Small updating the 18/04/06
I just learned that the AC30 are no longer team of lamps "china" in prampli but lamps "Tung-sol".
So for those who have heard about the problem of reliability and microphone of the lamps, remember that it's over, the new Tung-floor lamps are much better.
I have not yet but normally verifies the mine must be in Tung-ground.
Otherwise the four power tubes are still electro-Harmonix. (No problem of the cot)
Congratulations Vox have Ragit and have corrected this little problem!
See the source
Did you find this review helpful?yesno
Cookies help us improve performance, enhance user experience and deliver our services. By using our services, you agree to our use of cookies. Find out more.