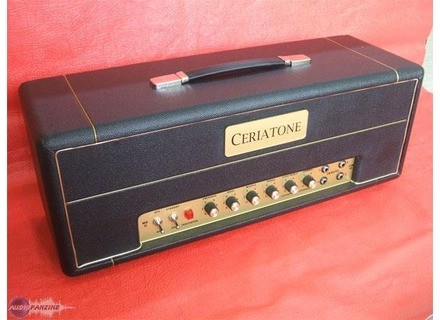 « The whole history of Rock'n'Roll »

View other reviews for this product:
Firstly, just to notify you that I did not buy the kit in the U.S., and yeah I have not bought at all actually, no I did not steal it either ... in fact our friends at Ceriatone having had the good idea to post on the site different "Layouts" for their wonderful amps, I decided to just order my parts on a site in Germany VPC (TubeTown) and launch me as a major in the melee, apparently I&#39;m winner of jail Wuhu. All that to say that for those like me, do not trust the various transport services (no I do not denigrate) and are yourselfers, there&#39;s more than to guys. It scared me at first but the wiring of vintage amps like the Plexi are really amazingly simple for anyone possessing a minimum knowledge of electrical / electronicque and obviously on the risks, well yeah gaffe was still there has the pretty stuff in the voltage.

Time to get serious!

Tube amp 1987 Marshall Plexi clone 50W, 2 channels: "Bright" and "Normal" each with two inputs High and Low.
Level settings not superfluous eh: (from left to right) Attendance - Bass - Middle - High - Volume "Bright" - Volume "Normal" - Jacks "Bright" - Jacks "Normal"
Level lamps is the 12AX7 Preamp, 3 to be precise, for my part of JJelectronics and power level, forcing Marshall is the EL34, the number of 2, still JJelectronics for mine.
As I said earlier, my stuff 50W delivers "to die for", as you say he will have to invest, either in an attenuator (I did) or in a very isolated house at the campaign, and yeah "50W Marshall Tube AC ​​sends clumsy. You are warned

Level effect ...
at the back are: an impedance selector 4.8 and 16 ohm speaker outputs and two input cable from PSU.
To know that my grade for this part is 9 but hey everything is relative, for me the following rather like &#39;plug and play is perfect. Demand for scratch needing a variety of channels and incongruous settings, have to go your way guys.

For the config, well I think that 60 years of guitar amplification was not found better, just have a guitar and finger yeah ben playing the guitar more or less boils down to that, "the wise.
Found that the level of all groups of legends of the 50s, 60, 70 that is Jimi Hendrix, Jimmy Page, AC / DC, Deep Purple and so on.
Obviously if you play jazz or metal, is not the best choice.
As stated Polakom, the settings are very interactive with each other, to find his own sound, do not hesitate to experiment with a maximum Quite why not add some pedals to him in the face, and a Start whawha and you find yourself at the end of the gig was fucking fire your guitar ...

For me, obviously that&#39;s great, the sound in my dream for some time, his legend!
The sound is warm, vintage, this slime is dynamic, it has bold wish, that&#39;s happy.
For the Normal channel: There&#39;s a lot of bass, it&#39;s very round, a little less focused on the crunch as the "Bright", the gain is still far enough, after all, very nice channel, j &#39;you confess that this is not the one I use most, a little too low for me, I try dailleurs with a low, well it is huge, careful not to abuse it too if you playing on a loudspeaker for guitar, in any case it is very fat and round, pushing the channel with a low you get to play Motorhead&#39;s "No problemo".
ON Channel "Bright" is by far my favorite, clean enough of a sweet singing overdrive and full of harmonics just turn the volume knob.
With a Start, it is round and hot desire, while slamming "as well, the sound of Jimi actually. Start + Plexi is a story that lasts for many years, I understand why now.
With a Les Paul, it becomes immediately heavier with little gain, claps well, still very hot, although the agreement can be discerned, a little sound to the Malcolm Young, if you go up the gain you get back has this wonderful fuzz overdrive limit that makes the legend of this amp, very dynamic, beautiful grain, to play is the top of Guns&#39;n&#39;Roses. Finally, to reduce the gain without needing to touch the amp, just turn the volume knob on his guitar directly and we end up with a good range of sound in the hand, for my part I manage to go from a sound "clear" by combining the two pickups sound "Lead" perfect for solos, simply by touching my volume knob on my guitar, just get in the habit.
With SG bin there there&#39;s no surprises, it is the sound of Angus Young, now you start to run and you roll on the ground by repeating "Let there be rock". The crunch is beautiful with an SG and it happens to have a gain TREA without adding a high boost.
It is a perfect amp for rock and roll, hard rock and blues.

I use it for 6 months now, I love it, I think I found the amp of my dreams, what attracts me most is its simplicity, is connected, turn the volume and is party. What one can blame him of course, is the minimalist settings or the failure to use only one channel at a time, although qu&#39;avac an A / B box must be able to do well, but when one chooses what kind of amp, usually you know what to expect.
I just followed my instinct to get into this project, I liked the sound plexi but I had never heard with my own ears, so it is with a lot of apprehension that I decided go for it, as you say that the crucial first instinct of power is almost religious, so now is stressful, and that&#39;s when the magic happens, sound, and what his friends, much more than a simple satisfaction of having completed a project, a real accomplishment.
The value is daunting, I paid about 500 € for the amp complete with finishing the box etc. ...
I ordered my different parts as I said on the site TubeTown for the chassis, I got good pieces of aluminum that I have bent to the visible face of chassisj&#39;ai simply paint alu golden color with a bomb, found in hardware stores, then print a "faceplant" on vinyl sticker and hop. For the box we bought the wood in a crafts store, the Tolex on the internet and just roll up their sleeves, it took me about 2 months of study and 2 months of editing to make my plexi, as you say it is not time wasted, 500 € and a little elbow grease to copy Ceriatone cons € 1300 on Thotho for republication of 1987, the choice is quickly made.
I also use it in concert, as you say that no pad is impractical if you want a distortion, unless he stick a distal input, but the charm of a good amp it is a slightly decrease. FYI I use a Weber Mass attenuator 100, the result is impeccable.
A word!