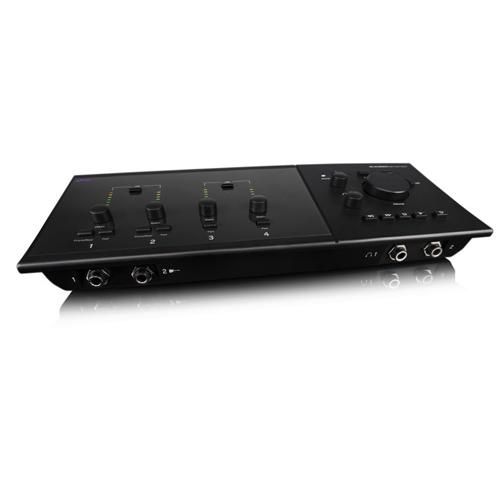 With connections on the side and on top, the brand new Fast Track C600 breaks with the typical M-Audio rack and half-rack design. Have manufacturers decided to fight their battle based not only on features but also on design ? Yes, indeed.

Just like the textile and record industries, the small audio world has been hit by popular trends as we can see every year at the main international trade shows, like NAMM and Musikmesse. Not so long ago, Line 6's modeling amps set a trend followed by all manufacturers, from Ibanez to Vox, Zoom, Fender, and Marshall. A few months later, and by unanimous decision, a new wave of pocket amps and all-tube 5-watt amps came out. Treading in Samplitude's and Altiverb's footsteps, all manufacturers wanted to have a convolution reverb in their product range — nowadays replaced by the "algorithm reverb is definitely better" trend. Another follow-the-leader example is the introduction of dozens of pocket recorders following the success of the Zoom H2.

And now, I'm pleased to announce the arrival of a new trend, this time in the world of external audio interfaces: the "desktop" interface. Where does it come from? Hard to tell, even if Mackie's Onyx Satellite came out in 2006 and TC Electronic's nice Konnekt 6 (2008) are precursors, recently followed by Steinberg's CI2 & CI2+, Lexicon's I-Onix U42S and Roland's Capture series, and now by the Steinberg UR28M, Propellerhead's Balance and M-Audio's new Fast Track C400 and C600...

The principle of a desktop interface is simple: instead of having the controls on the front panel like an effect rack, all controls are placed on the top panel while connections are located on the front or rear sides. This way, the unit can't be rack mounted but it gains in ease of use. The controls and lighting indicators are bigger, there is more space between them, and sometimes even more features. Which is the case with the Fast Track C600 we want to review today. It looks wonderful, like a fortuitous meeting…

... in a home studio between a sound card and Kubrick's monolith in 2001: A Space Odyssey.

The first thing you'll notice after taking it out of the box is that M-Audio took a very unexpected turn regarding design. The gray PVC akin to previous interface series is gone. M-Audio decided to go with Darth Vader-like black plastic, sometimes matte sometimes glossy, together with green, blue, red and orange LEDs. The overall look is really great, even if we would rather have the manufacturer use higher-quality PVC or even metal to give it a more classy feel when you turn knobs and push buttons. However, I must admit that the overall design is very attractive. The C600 is rather light, but heavy enough to stay safe on your desktop (and it also features anti-slip pads). Its great looks and ergonomically designed sloping front panel look very promising. 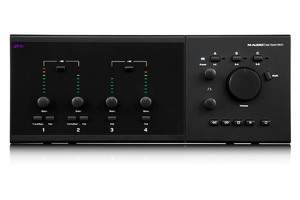 The first thing that catches your eye is the big volume control on the right with a pair of smaller controls to adjust the level of the two headphone outs (independent, channels 1/2 and 3/4). Above these rotary controls, you'll find three buttons to turn on/off the audio outs of the sound card pairwise: "A" for outs 1/2, "B" for outs 3/4 and "C" for outs 5/6. This way, you can use this section as a monitoring controller, connecting a pair of speakers to each output pair and switching between them very easily. This section offers another valuable feature: a MIDI transport panel allowing you to control your sequencer. Play, Rec, Stop, FFW and RWD: all main transport controls are there, and a "Multi" button allows you to program eight sequential steps (define eight operations you want to be performed one after the other when you press the button once). In other words, it's not a Mackie Control but it's enough to save you time and increase ease of use. Such controls should be available on all audio interfaces.

On the left you'll find the controls dedicated to the four audio inputs of the sound card. And once again, the space available on the control panel provides valuable extras, like the 8-segment LED meter for each input. This makes gain adjustment much easier... All other features are pretty standard. You get a Pad button for each input stage and two buttons to turn on/off the Phantom power of inputs 1/2 or 3/4. Inputs 1 and 2 are equipped with an additional button to select the front or rear connectors.

Are they different? Yes, of course. On the front panel, besides two headphone outs on 1/4" jacks, you have a pair of jack inputs, one of which (input 2) is a hi-Z instrument input. On the rear panel you have four XLR-1/4" jack combos for inputs 1-4. So, for inputs 1 and 2 you can select either the rear or the front connectors and that's why you have Front/Rear buttons on the top panel.

The rest of the connections on the rear are also standard: six line outs on 1/4" jacks, S/PDIF in/out on RCA, MIDI in/out on 5-pin DIN, a USB port, and one connector for the power outlet. This detail has some consequences: when you're using only the USB cable to power the C600, only inputs 1 and 2 are available. If you want to use all four inputs, you have to connect the interface to the power outlet. The same applies to the headphone outs since only one is available when the interface is used without external power supply. 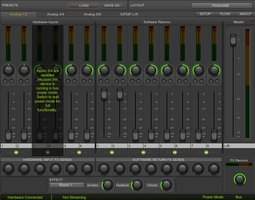 After installing the driver on your computer (I used a MacBook Pro) you can launch the control panel, which looks pretty familiar... Yes, of course! It's very similar to the MBox Pro control panel we reviewed recently. The GUI is the same. Only the layout of some menus and buttons are different because the two interfaces don't have the exact same features. In any case, you'll know that AVID and M-Audio are coming together, which is not necessarily a bad thing since we really liked the control panel when we reviewed the MBox Pro. Thus, you can view all four virtual mixers, one per output pair (three analog plus one digital output pairs), with all standard settings: solo, mute, pan, reverb send/return (besides delay and echo, you get six different reverb algorithms). You also have the option of assigning the big volume knob only to the selected outs, to switch the faders pre/post, to set the sample rate, to select the clock source... And that's not all!

Use the "Multi-Button settings" menu to assign the control elements on the interface to certain functions. This means you can use the transport panel with Pro Tools, but also with any other sequencer because the assignation of each control applies to keyboard shortcuts (one or several keys + a modifier, like Alt, Ctrl, Shift, Command). So, if your software can be controlled via shortcuts —which is the case most of the time— you can control it from the C600! 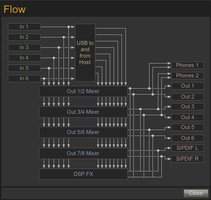 In this case, the Multi button works a bit differently: you can assign several keyboard shortcuts. For example, push it a first time to record, a second time to stop, a third time to go back to marker 3, etc. Since you can assign up to eight steps, there are almost no limits to the possible combinations. In real life, such controls aren't used often by most users. There is no possibility to return to the beginning of the combination so you'll always have to go through the full sequence. However, if someone finds a useful and valuable combination, he's welcome to share it in our forums!

Finally, you have the possibility to organize the control panel vertically or horizontally —like with the MBox Pro— or to display the signal flow.

The call of my guitar

To test this compact audio interface we used an Audio-Technica 4040 condenser mix, a Takamine guitar and our MBox Pro, which is much more expensive. To test the preamp stage, we used an Y-cable with our 4040 that was connected both to the Fast Track C600 and the MBox Pro. We placed the mic in front of the guitar and connected the two audio interfaces to the computer. Before starting we calibrated input levels using a mic in front of a speaker delivering a 1 kHz sinus wave. Once levels were calibrated, we noticed that the Fast Track had enough headroom, considering that the gain control was at the center position. That's very good news because with low-budget audio interfaces you usually have to turn the gain control at least three quarters up to have enough input level.

We compared both audio files —the one recorded with the Fast Track and the other recorded with the MBox Pro— and we can say that the M-Audio makes a fairly good job. The sound seems to have a better definition with the MBox Pro, especially on the first strum, but you won't notice a huge contrast. Considering the price difference between both interfaces, it's obvious that the low-budget version performs pretty well. Without any doubt, the new preamp sounds a little bit better than the preamp stage in the previous Fast Track versions.

To satisfy the expectations of some AF members, we also fed the device with a line signal to compare the conversion stages. Once again, the difference is very slight. Here are the audio files, make your own opinion:

In use, the C600 is very convenient due to its transport buttons, big volume control and desktop design. On the other hand, the Multi button didn't seem very useful to us, but maybe someone out there will come to love it, who knows! The operation of the A, B and C keys to enable/disable the line outs could be more practical: turning on one of them doesn't turn the others off. This could be useful when they are connected to several speaker pairs. Our last remark: why are there audio interfaces with four integrated preamps? Most of the time a solo musician needs only two preamps, while people who want to record a drum set will need at least eight preamps...

The new Fast Track C600 is a great success in every aspect. The desktop design is very practical, the controls are laid out in a very intuitive manner, instrument inputs and headphone outputs are easily accessible and independent, and the device looks nice. The full-plastic housing gives it a fragile look, but considering the price... When it comes to sound, we noticed an obvious improvement and the comparison with the much more expensive MBox Pro is flattering for the small C600. The preamps and converters perform really nice and this M-Audio interface will certainly be a good choice for musicians who don't want to spend more than $400 and don't need more than four preamps. Year after year the quality of budget products increases and the Fast Track C600 confirms this trend.