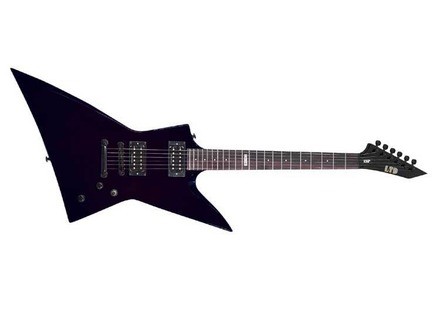 View other reviews for this product:
Everything has been said already I think ...

A highway ... to 22 boxes (it is more than enough!)
Anyway with my little fingers boudinnés, it rolls ...
Better than my Ibanez Xyphos despite the bolt-on neck LTD!

It should move against the anchor of the strap for a good balance and be careful because it above the handle comes off easily.
So setting "final" for the strap and more problems.

As for the finish, beautiful.
This is serious in ESP-LTD.

New one starts with laying a 10-52 tie, fine adjustment of the truss-rod gap and microphones. Result: much better than the old BC-Rich Warlock, but ...

I've ridden him in a 2009 DP-159 Evo trestle, the original microphone LH-150 is feeble. And then it sends a very heavy, a little cold but slamming.

By mistake I put the selector in middle position and ... insane!

The DP-159 bridge in combination with LH-150 in the original round pulls out a warm sound full of harmonics and no less punchy than one easel!
A heavy sound which the equalization of the distortion and the parametric eq of the table should be treated ... but awesome!

Well, for against the cleans are still not her thing ... but that's not what you ask!

The Ibanez Xyphos (who received the same care and settings, yet more fitted to the famous D-Activator DiMarzio!) Would supplant, the EX50 + DP159 was announced ... Well we will do the opposite!

The Xyphos (yet to € 850!) "Gives" and less "sounds" less than that shovel also entry level with its handle and screwed this little magic mike!
Incredible.

My friends are fighting over my poor guitar, which they also have other Xyphos Jackson Warrior with their own set of EMG active ... even a RR24 ...

Moral: go buy yourself an EX-50, an F-50 or any other ESP LTD equipped with LH-150, paste it a DP-159 or D-Activator in the bridge, set the switch in the middle and ... GAAAZZ!
You should end up on your ass.
See the source
Did you find this review helpful?yesno