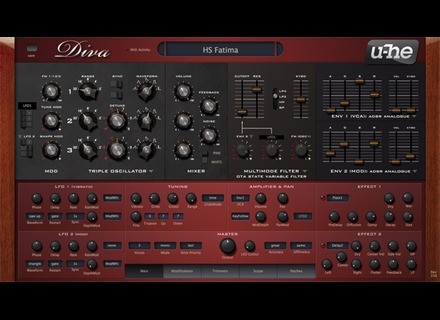 Buy this productView price information >
View other reviews for this product:
Installation very simple, no config incompatibilities and very intuitive, the manual not read because I had a bunch of VSTI and sytnhés hardware, and given the logic of this synth I read the manual was not helpful

mine profile: 2.66GHz dual core, 4gb ram, Motu Ultralite MK3 sound card, browsing some presets have the processor to its knees, it's food, especially good mode Divine, but even Great or lower, I think updates that will fix the pb

Performance in general we will say, as is said below, he eats a lot, but on the pc studio we were able to use many without being forced to convert some audio tracks

I use it for 2 months, so I tried vsti, oula! speaking only emulation concerning the Diva jsuis passed by Arturia, the Minimonsta (which however is already an excellent emulation) Korg Legacy breaks etc .... Diva competition, potato, filters beautiful, this long race lasts for a time in which the digital vainly endeavored to approach the warm, creamy, rich and everything you want pure analog has come to an end, and it has only just begun, it's just huge , from the 1st testing on the origins nimble it feels, must be able to combine the osc ms-20 with moog filter (among other possible combinations with juno and jupiter) it just gives a beautiful result. I had the money it there's a time to buy a bo n large analog, I put everything in vsti and it took until 2012 for not regretted not having a Moog Voyager or else, I'm not going to detail, the test is quite explicit about the capabilities of this vsti, but I bought 179 euros without pb, but if I am at the end of the month and I have nothing to eat in the fridge, 179 euros!! 2 months that I have and when I touch it ... I can not believe when I play for example with the preset Hoover (one of the famous human resource dominator) I took a slap and that this preset, the bass, pads, leads, nothing to throw away everything is perfect, they even thought about the possibility to resize the vst, I just have a few pbs for automation, but it must come from me, a lil effort on my part and you should be fine. I recommend not ... uh frankly I almost want to force people to buy it is on they will certainly not be disappointed after Zebra and ACE, as well as the effects Uhbik (reprinted in part in Diva), U-he is now recognized as a leader in the market VSTI, thank you to them
See the source
Did you find this review helpful?yesno
Cookies help us improve performance, enhance user experience and deliver our services. By using our services, you agree to our use of cookies. Find out more.