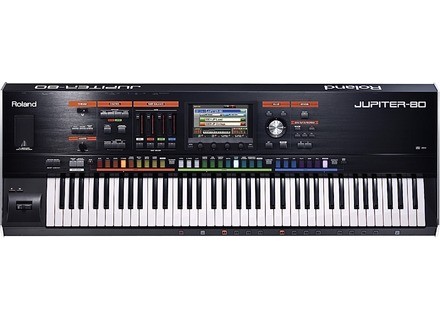 Jupiter-80, Digital Synth from Roland in the Jupiter series.

View other reviews for this product:
USE

To be honest, there's no need for a manual. It's rather easy to use.
Sound editing is pretty traditional. You can start either with a modeled waveform (sine, saw, square, SH, and super saw) or with sampled waveforms from classic and renowned synths, or with a hyper realistic "super acoustic" sound.
I was a bit disappointed to learn that the Jupiter 80 has less "super acoustic" sounds than the Integra.
But the Jupiter is good for purely electronics sounds, as well as for realistic sounds (it has some fabulous brasses).
In terms of electronic sounds, the options are huge...From vintage sounds with character to modern sounds (modern sounds that take from vintage sounds all the same).

The sounds are great for any style of music.
I have almost never heard such a realistic and warm orchestral sound. That's certainly due to the possibility to layer several sounds without too many surprises, given the 256-voice polyphony.
Hence, you can increase the sustain of your pads without the notes being cutoff due to the lack of polyphony voices available.
In this video of mine (youtube.com/watch?v=RaI5ZXH69zw), there's a pad with a very long sustain underneath the piano. I can't do that with my other synths that have 128 polyphony voices.
The piano is often criticized...You be the judge of its quality and purity: youtube.com/watch?v=OfkstfvQu7M&list=UUwnDgSStLuFagET1RmBF8ww&feature=c4-overview)
That video is worth more than a thousand words. Afterwards, there's not much to say about the piano.
I recently found the samples corresponding to the Strings of the VP330 among the long list of samples. I recognized it by ear, because the name is not too explicit. I compared it to the Xils V+ and the VP330 video, and it's exactly the same sound.
So, you have typical Jupiter 8 and Juno sounds, plus more modern and realistic sounds.
The effects are excellent although I sometimes think they sound cold, metallic. I had to find something negative...Although they are really good, anyway.

The aftertouch is hard! You have to press real hard...A pity! And the LFO modulation is not assignable to the aftertouch...A pity again!

The arpeggiator is not entirely programmable directly from the Jupiter. You need to first create the arpeggio and then import it as a MIDI file. Actually, you can import an arpeggio or an entire chord sequence to accompany a song, because it's a MIDI file. In this video I play the bass with the left hand, the melody with the right, the USB key playbacks the drums in WAV or AIFF and the arpeggiator triggers the chord sequence: youtube.com/watch?v=f7pSOMuAyEw&list=UUwnDgSStLuFagET1RmBF8ww
(I know, the sound isn't the best and the image is inverted, but you get the idea)

In short, the Jupiter is truly made for all styles.

It can even be used as a soundcard.

I own a JD800. And the Jupiter 80 is like having ten JD800s piled up! If you know that a performance is made up of four sounds, that you can layer two performances (that's already eight JD800), plus the Solo and Percussion parts, you get the ten JD800!!!

I've had it for a year now. At first, like most people, I asked myself whether buying it had been a bad move. But with time I have come to master it by playing, discovering, comparing. And I don't regret anything now.
Other than the fact that many of my other things sound like toys in comparison...I would love to get a Little Phatty to really boost the quality of my home studio.

It was pretty expensive at first (3300 euros), but now its price is more reasonable (2600 euros). For that price, you can expect a good sounding synth, if it's not a workstation. I am not disappointed at all!
Did you find this review helpful?yesno
Cookies help us improve performance, enhance user experience and deliver our services. By using our services, you agree to our use of cookies. Find out more.