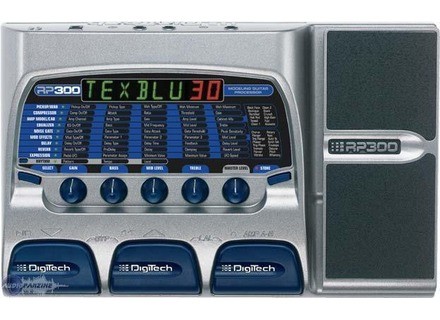 RP300, Multi-Effects for Electric Guitar from DigiTech in the RP series.

View other reviews for this product:
Crank amp modeling and digital multi-effects.
Modeling Amp: Fender Hot Rod Marshall JCM2000 (excellent), Mesa Boogie Rectifier, Vox, ...
Modeling firms: I do not use it because I think it's useless when you play on an amp.
Effects: Simulation of microphones, compressor, EQ, noise reduction, delay, reverb, chorus, flanger, phaser, tremolo, panner, tremolo, rotary, yaya, synth talk, envelope, detune, pitch shifter, wah, Whammy, .. .
30 Rhythmic battery with adjustable tempo.
Ability to record up to 30 seconds of music for such a work by slowing the speed solo without changing tone.
40 factory presets + 40 presets can be edited via the pedals only.
On each preset, there is the possibility to put two amps interchangeable with the pedal AMP AB.
Wah, Whammy, Yaya, reverb, volume, gain, vibrato can be controlled in real time with the pedal.
You can not edit the preset on a computer because no USB or Midi but a database is available on http://www.digitech.com

The general config is pretty simple, but we must look at the manual for more advanced options.
Only problem c preset selector is sequential.

The efffets the RP300 is very powerful except for the fact that I was not too well understood the value of the Whammy, Wah is correct.
Saaturation of the Mesa Boogie Dual Rectifier is a little dirty for my taste against that of the famous Marshall JCM2000 is particularly successful.
This is one I use most often, by varying the gain and equalize it can play any style rock / metal (punk, neo, thrast, speed, heavy, death).
I use it with an Epiphone FlyingV is everything works fine.
There is no need to use the simulation of microphones if you have a guitar that matches the style you play.
Finally there are 16 amp models, including two specifically for clean and one that simulates an acoustic guitar.

It's been 6 months and I use digitech strengths are quality effects and modeling.
I also tried a Korg pedal AG1500 that costs the same price and level of saturation had no photos.
This trinket now costs 320 Euros but there's the top model RP400, which is exactly the same except that the RP300 has more new output and input jack and a USB direct and which aims to make decision- via the software.
The only advantage of the latter is a better convialité taken to make sound and it costs 480 Euros.
If you like big sounds warm and well with a crisp high quality max effects, look no further.
See the source
Did you find this review helpful?yesno
Cookies help us improve performance, enhance user experience and deliver our services. By using our services, you agree to our use of cookies. Find out more.