This week we'll discuss a swaying technique which will allow you to easily create the illusion of lateral movement using reverb exclusively. 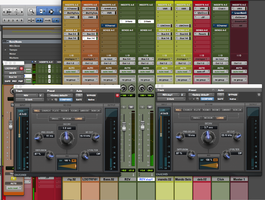 Before you begin, you'll need to create a couple of aux buses. Now, insert your favorite reverb plug-in in the first bus and choose a preset that fits the song you're mixing. Since the idea is not to work on the depth, but rather the width of the stereo field, I recommend you to use a pre-delay between 10ms and 20ms (at the most), always respecting the song's tempo. Send a reasonable amount of the signal you want to process to this first bus, so you can fine tune the reverb settings following the advice I've given you regarding decay, damping, EQ, etc. Next, copy the plug-in with the exact same setting to the second bus. The trick here is to increase just slightly the pre-delay and/or the decay of this second reverb, and then use the pan controls on the aux buses to place the first one hard right and the second one hard left.

What happens then? Well, if you send a signal to both aux buses in equal amounts, the reverb will give the impression of moving continuously from right to left. If you were meticulous enough when adapting the pre-delay and decay times to the groove of he song, this movement will flow with the music, giving the impression that the instrument in question is surfing a sort of rhythmic wave, thus bringing it to the front of the mix. Nice, isn't it?

You obviously don't want to apply this trick to all the elements of a mix, unless you want the listeners to feel dizzy, of course. However, used subtly on a couple of elements it can add a nice groovy touch to the song.

Personally, I like to use this method on solo instruments, like guitars or vocals, but also on percussive elements sometimes, like the snare or other percussive instruments that seem to be dragging a bit. In terms of presets, since it's basically an "unnatural" effect, I tend to prefer a plate or a spring over other algorithms, to get results with more "character." But, as usual, it's all a matter of taste, so don't be shy and try out different stuff!

Next time we'll close this long chapter dedicated to working the soundscape with reverb with one one last practical recommendation, as well as a short and non-exhaustive list of reverb plug-ins I personally find quite useful.