Last time, we saw how to recreate a realistic sound space with the three last buses of the setup I suggested to use when working with reverb. This week we'll address the concept of depth in a sound space, regardless of whether the latter is realistic or not. 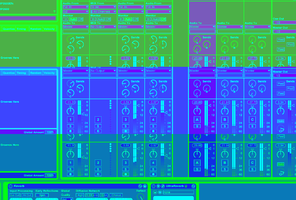 First, let me take a couple of moments to discuss the usefulness of such an approach. In another article we already saw that modern production techniques imply the need to resort to reverb tricks in order to infuse life into recordings that might be a bit dull. Obviously, your instinct will tell you to try to reproduce a realistic environment in the first place.

But some people also see this as a great opportunity to get creative. Thus, some producers have embarked in the adventure of "painting" completely unreal soundscapes. And I must admit that if the song allows it and it's well done, the results can be fascinating, without being shocking to the listener. So why not give it a try? Besides, modern musical arrangements are often far from being what you would call realistic, so don't hesitate to give it a go!

Well, you can virtually do whatever you want. However, there are a couple of rules you need to respect if you don't want to end up with a way too chaotic result. Don't forget that even if your goal is not to recreate a realistic space, you do want to create a sense of space! That's why I recommend you to stick to one of the guidelines I told you about in the previous article, namely the creation of three different planes.

In this case, however, there's no need to use the same preset for all three of them. On the contrary, the use of different algorithms and/or presets for each bus will render much more original outcomes.

Along the same lines. when you want to go for a surreal effect, Room algorithms are probably not your best option. Personally, when I want to work depth without any sense of realism, I choose a Chamber, a Hall or a Plate, but there are many other options. It's a matter of taste, and you are free to experiment as much as you want.

Nevertheless, I do insist that whenever you choose a reverb, regardless of how realistic or outlandish it is, you should always take into account your overall vision for the mix. So pay a special attention to the "sound colors" these reverbs inevitably bring with themselves and ask yourself whether they fit in the puzzle you are trying to put together.

Another thing you should consider is that the use of an unreal space results in less cohesion between the different elements of a mix. This means you will have to work more on the glue effect, be it with a bit more of reverb from the sixth bus of the setup or applying one of the techniques we'll study later on.

To finish, you should also know that the combination of real and unreal effects is not that uncommon when mixing... More on this in the next episode!