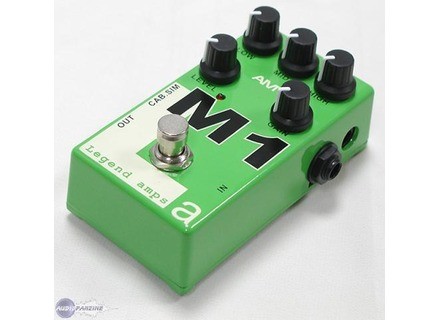 View other reviews for this product:
Well, do short: AMT M1 is a preamp pedal MXR format, using JFET technology.

Read PREAMP well, eh? So it is made to plug into a PowerAMP, not in front of an amp / preamp else!
That said, it is possible to still use the front panel, using the output cabinet simulator, and the results are drinking on a clear sound.
Connectivity simple and complete: input, direct output (for connecting to a return of PowerAMP or effects loop), cabinet simulator (for plugging in directly into a console, or in front of an amp for the more adventurous).
Detail: the M1 requires a 9V DC power (12V, it is even better), at an intensity of 6 mA (not greedy), negative center ... or a traditional 9V ^ ^.
Cosmetic level / strength, the pedal is well built, the switch is very strong and soft, the paint is good quality.
The interior is in the same vein: the circuit board is very clean, the interior as well as exterior machined.

Little bonus at the end: the pedal is Made in Russia, made in the city of Omsk, West Siberia ^ ^. It is even signed by its designers, gentlemen Kampf Marichev and Chernyaev. Long live the eternal Russia!
На Здоровие!

The general configuration could not be more simple: three knobs for EQ (bass, mid, treble), 1 volume knob, 1 gain knob.
I never looked at the manual, we do not really need.
It is very, very easy to find beautiful sounds: just dose level gain, restore volume, then even according to his tastes. The knobs are very effective.

The guys at AMT us understand that the AMT M1 is a simulation Marshall JCM800.
Never having tried a JCM800, I could not tell you if this is true, but what is certain is that this pedal sounds really good.
Contrary to what some have said before, the AMT M1 gives warm tones, full and dense. It responds well to volume knob on the guitar, and shines with its beautiful dynamic. The resulting sounds are really realistic sounds like a real amp, this is clearly not a gadget digital sounds "squeaking" (Notice to manufacturers cheap multi-effects).
In addition, the pedal has a good versatility, allowing the clean sweep a bit dirty, good bass distortion almost hard rock metal (depending on your mics, obviously).
The best big crunch sounds were very powerful, or the powerful distortions Rage Against The Machine. Obviously, cleans and high gain distortions were less convincing.
Note that the AMT M1 gives the best of itself in DC 12V power: the sounds are more vivid, fuller, with a little more dynamic. But it already sounds very well 9V.
So I do not absolutely negative reviews may have had this wonderful pedal. Either people do not connect, or they do not know a preamp plugs before PowerAMP (and not another preamp!), Or they do not know a pedal set with 5 knobs, or they have a defective model ...

3 chainings I used most often:
- Guitar = AMT M1 preamp direct out = PowerAMP Brunetti Rockit = Orange PPC112 V30, the sound was excellent, one of the best Marshall sounds I could have at home!
- Guitar = AMT M1 preamp direct out = PowerAMP EHX 22 Caliber = Orange PPC112 V30, the sound was very good, a little less realistic than the Brunetti Rockit, but it gave already want to play all day ^ ^ .
- = Guitar preamp AMT M1 cab sim = Peavey Nano Valve, the sound was better than the distortion of Peavey Nano Valve, but it was a lot lower treble to the sound is correct. Somewhat expected given the speaker&#39;s tiny Peavey Nano Valve. I also tested in front of a Marshall MG15CDR and height of height: AMT M1 gives a better sound than the typical Marshall MG15CDR poor boy!

Since November 2011, I used it for 28 months.
I&#39;ve used other preamps before M1: AMT P1 (good for metal / high gain modern), ENGL E530 (excellent, but it is a machine with a higher range) Damage Control Demonizer (a little disappointing this pedal).
What I love most: the sound quality, the realistic sounds, lovely crunch, manufacturing quality, small size, price, Made in Russia Omsk West Siberia.
What I like least: nothing.
The value is very good: 90 € new, used 50-60 €. Win this brand really be known.
Is what I would do this choice? Obviously yes!

NB: for practical reasons, I sold the AMT M1 (which I will miss), so I can buy AMT D2. Yes, I am in AMT!
However, I consider buying a M2 AMT.
See the source
Did you find this review helpful?yesno
Cookies help us improve performance, enhance user experience and deliver our services. By using our services, you agree to our use of cookies. Find out more.