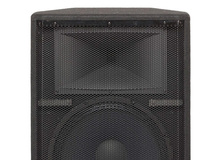 In The Round On Current Tour

Grand, colossal, gargantuan… Mammoth, immense, monumental… Promethean, towering, or just plain walloping huge - get out the thesaurus for more adjectives to adequately describe the size and scope of U2’s current 360° tour, an outsized extravaganza that continues to demolish records.

As of June this year, the tour surpassed The Rolling Stones in terms of tickets sold, eclipsing the Voodoo Lounge tour’s 6.3 million landmark with over 7 million sold. By April just past, 360° had grossed more than $700 million, making it the highest-grossing concert tour ever. And so on. Pass the thesaurus…

Launched in 2009 in support of the album No Line on the Horizon, the tour has been years in the making. Incubating various ideas for epic in-the-round staging with the band and other crew members over the course of a career with U2 that began in earnest back in 1982, show designer Willie Williams finally gave life to a unified vision near the end of 2006’s Vertigo tour in a series of sketches.

Paying homage to the Theme Building at LAX, the central structure within these early blueprints is what has come to be known as “The Claw,” a mass of four-legged, 170-foot-tall alien steel appearing ideally suited for a starring role in the next Hollywood remake of H.G. Wells’ War of the Worlds.

Serving as a grid for all of the major production elements, The Claw is used to suspend both the PA and a video screen designed by Mark Fisher in collaboration with Chuck Hoberman and Frederic Opsomer.

Fabricated by Opsomer’s Belgium-based company Innovative Designs, the screen was purchased by XL Video and then rented to the tour. Comprising hexagonal segments that allow it to open and spread apart during the show, the expanding screen is 500,000 pixels large, and uses 320,000 fasteners, 150,000 machined pieces, and 30,000 cables to tie everything together.

Rated to safely hold 200 tons, The Claw is double the size of the stadium set used by The Stones on their A Bigger Bang tour. And if one of these leviathans isn’t enough for your backyard standing next to the children’s playset, consider that the design was built in triplicate to facilitate leapfrogging, a logistical strategy requiring 120 trucks.

U2 360° will also go down in history as a milepost marking a 30-year collaboration between U2, sound reinforcement provider Clair, and Joe O’Herlihy, U2’s sound designer and front of house engineer.

“The 360 concept was indeed first considered very seriously by the band at the end of the Vertigo Tour at Honolulu’s Aloha Stadium in 2006,” O’Herlihy relates, his navel-length, graying beard giving him the countenance of a Russian novelist, or maybe a Civil War veteran.

“There had, however, been various other in-the-round plans discussed since Joshua Tree days,” he continues. “Once the idea was presented as a goal for the next tour, I was charged with developing, planning, and implementing an audio design that would clearly set new industry standards, all while maintaining what U2 and their fans had come to expect: Sonic quality, high dynamic range, and crystal-clear stadium sound.”

Working with show designer Williams, plus Fisher and Jeremy Lloyd from the production architectural firm Stufish, O’Herlihy additionally relied upon the talents of an R&D team and engineers from Clair to establish the criteria and structural elements required of the build in 2008.

Up until this time, U2 had historically relied upon Clair S4 PA to meet the needs of all its outdoor stadium shows.

“But with the goals of the 360° system in mind, the S4 system wouldn’t apply this time around,” O’Herlihy says with a hint of melancholy like that usually reserved for bidding farewell to an old friend.

“In-the-round, the application clearly called for a line source array system. The new Clair i-5 technology ultimately stepped-up as the timely and perfect solution that we needed to accommodate the off-center, 360-degree stadium configuration.”

The audio design team received their first real chance to test its plan in early 2009 in Toronto.

Setting up the i-5/i-5B-based rig at Rogers Centre (formerly SkyDome), the system was put through its paces over the course of rigorous testing that verified sonic calculations and phase references, established low-end time alignment, and confirmed strategies developed to maintain full 360-degree coverage, all while covering the audience with a blanket of even, uniform sound and high SPL, as well as the dynamic range and quality the band is known for in large outdoor spaces.

Today, on this, the seventh leg of the tour in North America, the sound system sprawls out widely across 15 zones, deployed in a combination of different hangs.

Traditional left/right hangs facing the house mix position incorporate 36 i-5 and 36 i-5B boxes per side. Moving around to the opposite side of The Claw, left/right hangs of 24 i-5 and i-5B cabinets apiece are designated as rear arrays.

Left/right hangs of 16 i-5 and 16 i-5Bs each continue the circle on the east and west poles of The Claw, while the main stage area houses a ring of 24 front fill FF2 enclosures and 24 BT218 subs.

A “B” stage used in the production is essentially a circular ramp that connects to the main stage via moving bridges.

Those holding general admission tickets can be seated either outside the ramp or in between the ramp and the main stage. For this B stage area, 72 S4 subs amend the low-end.

Power for the entire affair pummels yet another record, using the largest number of amplifiers ever assembled by Clair for a tour.

In total, the amp-army waging the campaign under O’Herlihy’s command includes over 180 Lab.gruppen PLM 10000Q and 14000Q models, plus 20000Qs employed to give serious grunt to the low-end.

To accurately calculate the SPL required of the formidable task of bringing sound to audiences routinely numbering 95,000 each night, the resources of Clair’s proprietary AlignArray software were enlisted.

Having been with the band since its early days, and working within the industry since the early 1970s when he toured with Rory Gallagher, O’Herlihy draws upon tried-and-true technologies he knows that work, as well as the latest the industry has to offer to complete his aural palette.

“I went with DiGiCo on this tour for my console needs,” he says, “based upon the multi-matrix capacities and onboard effects I could keep at hand. Two SD7s run identical shows. Each has three stereo outputs for inside left/right, outside left/right, and the matrix left/right - a combination of the inside and outside left/right for the side hangs. There are two 40-input main stage racks, with one distributing AES to each leg, and a backup system of analog feeds to each amplifier.”

Serving as living testimony that even in this digital age, not all effects need come from the console, O’Herlihy stands by outboard gear including a Manley Vox Box and an Avalon 737. Guitar compression is a task relegated to a DCL-200 compressor/limiter from Summit Audio; all other limiting falls under SD7 protocol.

With the band constantly performing to the audience on all sides, input relies heavily upon wireless elements from Shure for instruments as well as vocals, with a Beta 58 standing-in as per usual in the lead position.

In the backline, drums are captured at kick with a Beta 91/52 combination, SM57s on snare top and bottom, an AKG 451 on hat, Sennheiser 421s on toms, and Audio-Technica AT4050 multi-pattern condensers on overheads.

Monitorworld on the tour occupies a below-grade, subterranean space that could conceivably make a nice home for trolls, voles, or nightcrawlers at each stop if it wasn’t such a hive of activity.

With no direct sight lines to the stage, the crew uses video monitors to perform the visual portion of its work.  On stage, Sennheiser G2 hardware is paired with Future Sonics in-ear monitors for the band, along with a selection of Clair 12AMII “Stealth” wedges kept out front.

A team of five keep monitors running. Alistair McMillan and Richard Rainey build their mixes on DiGiCo SD7s, with one assigned to Bono, and another to The Edge.  CJ Eiriksson stands at the helm of an Avid D-Show used for bassist Adam Clayton, drummer Larry Mullen Jr., and an offstage keyboard player.

Multi-tasking extends into McMillan’s work schedule as well in the form of recording each show directly to ProTools, a task done for archival purposes only performed in conjunction with assistant systems engineer Vincent Perreux.

As within the industry itself, mainstream media have remained upbeat in their coverage of the tour. Rolling Stone magazine maintained that the production was a cross between the Zoo TV and Elevation tours, and added that the design elements, despite their looming presence, remained transparent from the band’s perspective onstage.

“A project of this scale would probably not have been attempted 10, or even five years ago,” he concludes. “But thanks to lighter weight, low-profile loudspeaker cabinets and digital mixing consoles, even shows of this magnitude can be set up, run, and loaded-out in a timely manner. Technology has caught up to the concept. Now it’s just all in a day’s work, 48 hours a day, eight days a week…”