After discussing volume in the previous article, this time we'll focus on your ears.

What did you learn last week? Something unbearable... The race for volume that started in the early 1990s ─ thanks to the possibilities digital audio offers in terms of compression, plus the intensive use of limiters ─ results in tracks having a much higher mean volume than songs that had preserved their original dynamics. And that is bad for music and, hence, for your auditory system (yes, I know I'm repeating myself).

But why? Well, because the music always sounds loud, even at low volumes (wait, what?!). Apart from this obvious paradox, if you want to listen to music loudly, there's an extremely sophisticated tool that is very difficult to use and requires years of practice to master, let me introduce you to: The volume knob!

Before going into the rationale behind this race (if you want to see any rationality in it, that is), let's first take a look at your ears. Those formidable and completely unknown tools, often abused by many of us. I won't go into any medical, physical or psychological definitions. But the human ear is truly formidable: Throughout human evolution, it has specialized itself in recognizing human speech. As human beings became social animals, the main concern of the auditory system was to facilitate the understanding between peers.

The fundamental frequencies for discriminating human speech (understanding words) are concentrated in the mid frequencies (between 200 Hz and 5000 Hz, on average). Would you believe that the ear acts like a filter depending on the overall volume? The lower the volume, the more the ear "cuts" low and high frequencies, to the benefit of the mid frequencies. 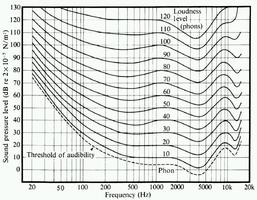 Try it yourself: Play back a well-produced song through your audio system (I like to use something like Steely Dan or some other West Coast pop songs from the '80s for this purpose). Now, ask someone else to gradually and slowly lower the volume (or place the song in your DAW and automate the volume). You should hear the voice stay always on top of the music, while the latter seems to decrease in volume. It might take you several listens, but don't give up. And if you can still hear other instruments, it's because their frequencies are concentrated in the mids, too.

This phenomenon is well-known (thanks to the sometimes controversial equal-loudness contours) and it is used to calibrate control rooms at a given reference volume, which is supposed to be the most linear in terms of frequency perception. Another well--known application is the Loudness control that you can find on almost any hi-fi system, allowing you to compensate the lack of low and high frequencies at low volumes (and which, for obvious reasons, ought to be deactivated when you pump up the volume).

To sum it up: It's quite normal to hear less bass and treble at low volumes (and I'll come back to this later on). 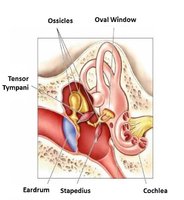 Another particularity of the human ear is that it has no equivalent to the eyelids, as you have probably noticed. This makes it difficult for the ear to protect itself against external aggressions. However, it's impressive what it can handle (the difference in intensity between the quietest and loudest audible sounds can be of...a trillion to one!). And, incidentally, it is more sensitive to mean level variations than to transient level variations. And that's a good thing, because if it didn't have this ability, you would be forced to cover your ears with every percussive sound. Conversely, if you take out the transients of a song, your ear will immediately let you know that the sound is flabby, without dynamics, lacking punch.

Nevertheless, the ear has a very good protection system, although it is unfortunately very sensitive, and it wasn't conceived for long exposures. It must be noted, however, that it is pretty rare to find loud and long-lasting sounds in nature. They are almost systematically the result of industrial evolution. This protection system is called the acoustic reflex, which is the involuntary contraction of a middle ear muscle (the stapedius muscle, the smallest skeletal muscle in the human body, measuring only one millimeter in length). It occurs in response to very high sound pressure levels (SPL), attenuating them for a given time. This reflex is actually triggered approximately 90ms after you hear the sound, letting through only loud peaks.

This attenuation can last up to 15 minutes at 100dB, but only several seconds at 120dB+, before the human ear suffers irreparable damage.

Current regulations in the EU state that workers ought to be exposed to an average level of 80dBA during an eight-hour workday. In the U.S., the Occupational Safety & Health Administration (OSHA) set the permissible exposure limit (PEL) at 90dBA for all workers for an eight-hour day. The "A" after dB stands for A-weighting (according to IEC 61672-1), an attempt to reproduce the average frequency response of the human ear for each frequency band. Anything measured with this weighting is considered to reflect the way in which most human ears would perceive the sound being measured.

Take a good look at the following table. It indicates the maximum exposure times for any given volume (the rule is very simple: Time is halved with every 3dB increase). If you intend to keep your most precious working tools ─ your ears ─ safe, there are very good smartphone apps (like Alpine MusicSafeCheck, to name one, which is free by the way) that can help you out. Or you can obviously use professional sound-level meters, too. In any case, you'll need to constantly monitor the surrounding noise and you should have audiograms (hearing tests) performed regularly by a professional. 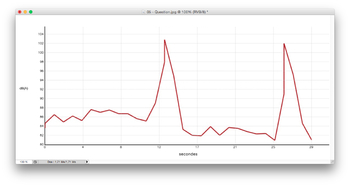 One last question before we finish this fourth installment: Where are thousands of people daily exposed to a frequency sweep between 3000Hz and 7000Hz at a volume between 100dBA and 103dBA during two or three seconds, without them even raising an eyebrow?

Find out in the next installment.