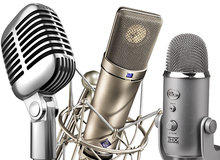 A Survey of Kick Drum Microphones

Our survey of kick drum microphones through the years continues....

In the 1990s, Shure debuted the Beta 52, the company’s first purpose-designed kick-drum mic, with its response specifically optimized for the task at hand using an internal EQ network.

Its integral mic stand adapter, oversized body (inside is a regular-sized capsule) and passive LC network are strategies that have been copied by many over the last decade. The idea was to make it easier by eliminating the need for EQ.

Shure even knocked itself off, after watching others do so, with its own PG series of inexpensive mics, and its PG52, at half the price of the Beta 52, is about what you’d expect. There have been many imitators of this ‘large body means big sound’ with varying results, but the concept of a contoured response, customized to the needs of the drum is here to stay.

Manufacturers have gotten caught up in ‘big mic’ aesthetics, as users are easily invested with the false notion that bigger is better for a kick drum, or that a large diaphragm is better for low frequencies, which is only true in some cases for condensers - other factors really do play a part in determining how well a mics response is tailored for kick drum.

As such, there’s a proliferation of sub-$100 kick drum mics, and the old chestnut that ‘you gets what you pays for’ really applies. I’ve rarely found a cheap mic I could recommend to pro users, while a quality microphone will serve its owner for years while retaining its value.

The following modern kick drum mics are favorites, and are designed to get a sound engineer most of the way there before ever touching the EQ. In efforts made great mics for floor toms, they never quite delivered the goods for kick drum.

The Audix D4 is just one example, but I can single it out because the company did such a great job on the D6, which immediately replaced the M 88 as a personal favorite.

The D6 is a second generation cardioid kick drum mic with a tight low end and smooth contoured response.

The beyerdynamic Opus 99 and M99 are really the same mic. hypercardioid and contoured with passive filters, but the M99’s switches allow the engineer to independently turn off the mid-cut and HF boost, making it useful for a wide range of applications beyond kick drum.

The Electro-Voice N/D 868 is a cardioid kick drum mic that sounds somewhat like an RE27, but with pre-contoured EQ built in. The Sennheiser e602 and newer e902 are both contoured cardioid dynamic kick mics, but the e902 has more high-end snap.

We know that placing mics inside the kick drum offers a degree of isolation. The Randall May drum mic system permanently mounts a microphone inside a drum.

An armature attaches to existing drum lug hardware inside the drum, with an XLR on the drum shell. No stand required.

You may have seen kits with this system without realizing it, because you can’t see these mics. This is a standard option from DW Drums, as well as a few boutique custom shops.

Mounting the mic inside adds presence, increases isolation and reduces cross-talk, and also keeps the mic out of the way so it doesn’t get hit or bumped. Most of the above mics are available as May installations.

For the Shure SM57, May removes the transformer (sound familiar?) and stiffens the edge of its diaphragm to bring out the lows.

A few years ago May also introduced a “blender” to mix the balance of two kick mics for different tonal effects.

While it’s hard for engineers to allow musicians that kind of control at a gig, Jim Keltner’s use of the system to blend two inside mics—one aimed at the batter and the other at the resonant head—shows that the ultimate application of the May system is to leave the front head intact.

Those of you paying attention will be trying to put two boom arms in one hole at your next line check.

The 1980s also saw the introduction of the Shure SM91, intended as a boundary mic for similar applications as Crown PZM designs.

The SM91 crossed over to Broadway as a foot-mic, where it was discovered to make a full-sounding kick mic in tight orchestra pits, where mic stands are easily humped.

Engineers had been adding a second snare mic for years, besides allowing two channels in festival input lists for double-kick drum kits, so two mics in the same kick drum wasn’t much of a stretch.

Though the 91 doesn’t need a stand, it bounces around in some drums, so custom foam pedestals are often carved to isolate and protect them. Others are content to just put them on the ‘drum pillow.’

While its low frequency response is hemispherical, it becomes directional at higher frequencies, so its orientation affects the amount of attack.

By itself, the 91 provides a full sound, with extended bandwidth and more apparent volume than a dynamic rule.

This explains its initial popularity with Vegas acts who wanted a impact without scaring the old folks. Combined with a dynamic mic, it adds extreme lows as well as definition and click.

Some find the 91 less useful than an old-fashioned dynamic for floor monitors, though many like having the option of both inputs to create a wider palette of sounds for different musicians on stage, especially if some are on ears.

The SM91 was replaced by the Beta 91 in the 1990s, but some still prefer the sound of the original, identified by a 3-pin mini connector at the pre-amp instead of a 4-pin connector. Other manufacturers have offered boundary mics, with varying degrees of success.

Products intended for conference table applications don’t always stand up to the rigors of the mighty kick. However, more recently, a few have come up with application specific boundary mics with high headroom and tailored frequency response, like the Sennheiser e901.

Studio guys will tell you that a great technique is using a large diaphragm condenser (LDC) several feet away, often constructing a tunnel of sound, deadened to maintain isolation.

For live gigs this has obvious limitations, combined with the fact that they usually get increasingly omni-directional at low frequencies.

Some engineers have had good results using an AKG C414 fairly dose to the kick drum’s sound hole for lighter acts, but most chose to use their 414 inventory for other tasks before dedicating one to kick.

It’s worth noting that single-diaphragm LDCs like the C3000 maintain their directional pattern in the low end, making them better candidates for all kinds of full-bandwidth live applications, besides being less expensive.

The Audio-Technica AE2500 dual-element cardioid mic places a dynamic and a condenser element in the same housing. This invention borrows from the studio ploy of taping a 57 and a 451 together so they’re time-aligned, and capsules are borrowed from A-T products in both categories.

Some find it has more potential on snare and guitar cabinets, but many swear by it on kick drum. And yes, it costs about the same as two good microphones.

A while back, Yamaha introduced the SKRM SubKick, a 10-mch drum shell with a 6.5-inch woofer inside. This kick drum mic’ing idea is borrowed from the old-school studio approach of using the woofer from a Yamaha NS10 near-field studio monitor (usually available because its tweeter was blown) as a microphone for the kick drum.

Different results are obtained depending on whether tile woofer is in the NS10 cabinet to dampen its response, or is in ‘free-air.’ The frequency response of the woofer naturally rolls off the highs, but this technique has always been used to compliment another, more traditional mic’ing technique, providing a fatness and thickening that complements the transient of a condenser.

It’s not for everyone, but many think it’s “da bomb.”

Earthworks Kickpad/SR25 combination is a kick drum solution from the company’s three-mic condenser drum mic kit. Rather than design a mic specifically for kick drum, the company provides an in-line XLR barrel for its SR25 cardioid condenser which pads it down and contours its frequency response.

The KickPad can be bought separately and can be used with other mics, especially helpful with condensers, and it can also be used with dynamics, but pre-contoured kick drum mics get far less benefit from a double dose.

Many consoles can achieve the same results by putting in a pad and a mid-range cut, as sometimes they’re just not options on the desk (i.e. PreFade = PreEQ).

Now that we’ve established two inputs as standard, the next frontier is obvious. Someone recently joked that it’s about time we added a third input, but I agree wholeheartedly.

We’re best able to evaluate various combinations and new microphone choices by simply allowing for a third experimental kick drum mic in the input list. You may find that you can replace the two mics you’ve been using with a single mic that works better.

Alternatively, you may prefer some two-mic combination to what you’ve used all along.

How else are you going to find out unless you put some play time and space into the daily grind? Most engineers plan an hour between line check and sound check.

Why not invest a little of that time every day to learn more about microphones that make it go bang!

← Previous article in this series:
A Love Affair With Channel One