Getting to know your gear

Following the previous article, I think it's appropriate to discuss a crucial topic when you want to take recording seriously: the knowledge of the tools at your disposal. That's why today I will show you a method that will help you understand better the characteristics of your recording gear. This, in turn, ought to make your life easier when it comes to making choices during a recording session.

As you have seen before, your choice and placement of mics is not to be taken lightly when you want to get the best possible recordings. And it doesn't matter how many hours you've spent listening and dissecting the audio clips available throughout this series, nothing will ever beat experimenting with your own equipment. That's why today I will suggest an approach that ought to help you discover the true potential of all those nice little toys you have lying around in your home studio. The method has two stages.

First of all is the recording phase. Choose an instrument whose sound you know by heart in the real world, in other words, an instrument your ears can recognize well enough when you listen to it live, not on a recording. The instrument itself is not important because it's not going to be the object of study in this case. That said, the wider the frequency range it covers, the better because it will allow you to consider the recording material from a more global perspective. At this point, no artistic-aesthetic considerations should interfere with the process. The music played ought to be simple enough so that the performance doesn't influence your judgment. Personally, I usually choose a well-known song I know inside out instead of one of my own songs. I have the annoying tendency to allow myself more liberty with my own songs... which is a good thing live, but that doesn't really help with the consistency required for this exercise. 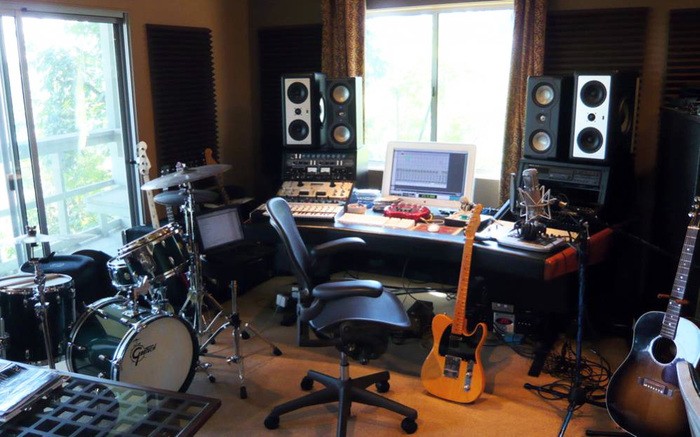 Now, you should pick one of your mics and put it in the first place that comes to mind as a good spot to record. By way of example: I used an electric guitar with an amp recorded with a good old SM57, a classic mic for such recordings. I first placed the SM57 right in front of the speaker of the guitar amp, on axis, and started recording. You should take special care naming the takes correctly. And don't forget to take notes, and even pictures, of the mic's position because this information will be essential during the second stage. Once you're done with that, the next logical step is to move the mic in front of the sound source by changing the distance or the angle and then make a second recording with a performance as close as possible to the previous one. Once again, document the recording conditions. In the case of an electric guitar, it might be wise to record a riff or rhythm guitar with a DI box beforehand to simply re-amp it afterwards, thus eliminating any performance discrepancies. Start over as many times as you see necessary. I recommend you to do this with each of your mics, and trying out different preamps, compressors, and/or EQs, if need be.

Let's move on now to the second stage: the analysis. It's strongly recommended to leave a couple of days go by between the recording and the analysis so that your ears are fresh when you start with the second phase.

The principle behind this stage is as simple as that of the first one. You only need to listen attentively to the recordings you made and take notes regarding the sound of each of them. Pay attention to the differences in terms of spectral balance, dynamic response, the sense of space, etc.

Cross-checking the notes of the two stages you should be able to make yourself a better idea of how you can best use the mics, preamps, etc. you tested. To get a deeper understanding of your gear you can apply this same method to different sound sources. Granted, it takes time, but I guarantee it will save you time later on, because you will be able to make better and faster decisions in a actual recording situation.

Join me next week to begin a new chapter dedicated to recording electric guitar!