As mentioned in the last installment, we'll start the rough mix by panning the different elements of the mix. To do that, I recommend you an incredibly effective game I discovered several years ago thanks to a sound engineer friend of mine. Romano, if you are reading these lines, thank you again for this find! 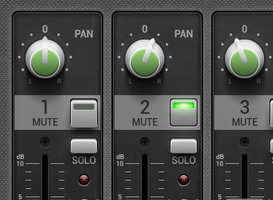 The principle behind it is extremely simple. First of all, mute all tracks that will remain in the center, like the bass, the main vocals, the bass drum, and the snare, for example. Then, adjust the volume fader of each of the remaining tracks so that they all have the same level. Now, start playback and begin to fiddle with the pan pots. Try different combinations, listen to the changes in sound textures and pay special attention to the rhythmic interactions that take place. And, especially, consider how it all influences your feeling of the music.

After several minutes of doing this, you'll notice that the same instrument doesn't arouse the same emotions in you when it's on the left as when it's on the right. Likewise, the groove of a song can change radically depending on the relative placement of an instrument with respect to other instruments. But why is that?

The reason why panning has such a great impact on how you feel music has to do with psychoacoustic principles. I must admit that I'm far from being an expert on the subject, but I will nevertheless let you in on my reflections about it.

I suppose you have all heard about the brain's left and right hemispheres. According to Wikipedia: "Perceptual information is processed in both hemispheres, but is laterally partitioned: information from each side of the body is sent to the opposite hemisphere." Which means that the left ear feeds the right brain hemisphere and vice versa. And since each hemisphere has its own particularities (language is processed by the right side and spatialization by the left, for instance), it seems obvious that a sound won't be interpreted the same way by the brain if it is heard by the left or the right ear.

On the other hand, from a rhythmic point of view, panning that's symmetrical will convey a more powerful feeling, while an asymmetrical setup will be felt as more groovy. Here's a more practical example: Imagine that you have two complementary rhythm lines, one on the beat (A) and one offbeat (B), each of which is doubled. In total, you have four instruments to spread across the stereo field. If you use an AA/BB panning, meaning line A and its duplicate are on one side and B and its duplicate on the other, you'll get a clean and "dancing" sound. If you decide to go for an AB/AB panning, you'll get a bigger and more powerful result. To convince you of this phenomenon, I invite you to do the test yourself with a couple of simple rhythms. You'll be quite surprised the first time you become aware of it!

Now that you are conscious of this, it's up to you to make your own conclusions and choose the best solutions for the song/puzzle you are working on. By the way, this fun game with the pan pots shouldn't take you more than 15 minutes. In fact, it's useless to spend too much time at this because, in the end, it's not the intellect that's taking decisions, it's more of a gut feeling, and, in that sense, the first impression is often the best.

In the next episode we'll finish with the rough mix by establishing the basic volume for each instrument.