After having recorded a bowed upright bass last week, today we'll see how to track a double bass played with the fingers, a technique called pizzicato.

Since we already discussed the particularities of the instrument itself last week, this time I'll focus on the particularities of this type of playing. Pizzicato produces completely different sounds compared to a bow: transients are very brief, the sustain is relatively short and, in most cases, the dynamics are much larger due basically to much more pronounced level differences between attack and sustain. So, with all this in mind, I decided to use two mics for the recording.

Before using any mics, let's see what happens when we use the pickup: 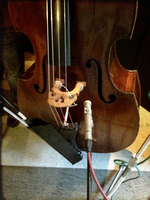 It's certainly better than the takes we did last week with the bow and while it could be very useful for live situations, I'm pretty sure we can get something better in the studio.

To achieve that I'll first place a mic 6 to 15 inches (15 to 40 cm) away from the highest-pitched string, slightly above the bridge. As you will see, the position of the mic with regard to the F-hole and the bridge is paramount. We'll start pointing the capsule right at the center between them. Do note that all the following clips were made with an Oktava MC012, a small diaphragm condenser mic, but you are free to experiment with other types of mics depending on the sound you're looking for.

Let's see now how it sounds when pointed towards the bridge and then the F-hole:

From the results it's clear that moving from the bridge to the F-hole makes sound go from brilliant to dark. It's up to you to find the right balance for the song you are working on.

But what about the attack? True, the previous clips don't really feature much of an attack. To capture it, I like to use a second mic placed about 4 inches above the hand striking the strings, at an angle of 45° from the neck and about 6-8 inches (15 to 20 cm) from the latter (see pictures). In this case I used a good ol' SM57 for that task:

On its own this take isn't really interesting. But mixed together with the signal of the first mic, this track becomes an extraordinary tool to manage the attack. You don't believe me? Well, just take a listen to the following clips where I have automated both recordings, starting with the signal of the first mic on its own and then gradually integrating that of the second mic:

The array of sounds is much richer, isn't it?

I hope this recording of a pizzicato upright bass will help you find what you are looking for. Next week we'll tackle an issue that today's recording made obvious but which I intentionally avoided, namely the phase problems that can arise when recording an instrument with two mics.

I once again would like to thank Colin for taking time out of his busy schedule to help me out with these recordings. Colin is the bass player for the Chozpareï, a must-see act in the Montpelier scene, as well as for Tana & the Pocket Philharmonic, a fascinating new band that will shortly start making waves in the French scene both for their music and their fondness of going on tour.