In the previous episode we saw the ABC of close miking a snare drum. Today we'll take it a step further...

Let's start by discussing the choice of microphones. While the famous SM57 is the standard, it can be worth switching to other microphones, especially if you are not really going for a "rock" sound. A small-diaphragm condenser mic as the bottom mic allows you to get a more natural and finer sound. But do note that it will need to have a cardioid polar pattern, otherwise you'll end up with a lot of bleed from other elements of the kit. Among the models most commonly used for such tasks are the excellent AKG C451 B and the Neumann KM 84. But you can also find cheaper solutions nowadays, like the Oktava MK-012, which is pretty effective. These mics also make a great choice as "Snare Top" mics. Nevertheless, I still recommend you to combine them with an SM57 to retain the energy of the impact. The mix between the condenser and dynamic mics will allow you to balance out the "definition" and the "power" of the recording. But pay special attention to any potential phase issues, which are not uncommon when recording the Snare Top track with two mics.

Now let's look at a nice little trick that might come in very handy if you don't have the possibility to record Snare Top/Snare Bottom due to lack of mics or channels on your audio interface. In this case, if you want to be able to play with the balance between the attack and brilliance of the snare, you can use a single mic placed on the side, aiming directly at the shell. You can then balance the top/bottom sound playing with the height of the mic. This method obviously provides less precise results and doesn't allow you to modify the mix afterwards, but it does have an advantage: the use of one single microphone does away with any phase issues. 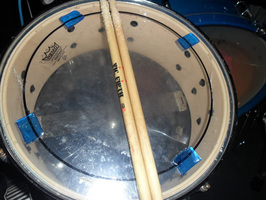 One last trick before we call it a day: Moongel. Given its amazing effectiveness, this accessory ought to be in the toolkit of every audio engineer worthy of the name. But, what is it good for? Quite simply to attenuate the harmonics and/or the sustain of the drums. And if you consider how this aspect can vary from one kit to another, it's certainly no luxury. Depending on the musical style, it's crucial to have control over such things. It can, for instance, be a real nightmare to try to mix the drums of a rock/metal track if the snare has lots of harmonics. Or any song with a high tempo and lots of snare can become unmanageable during mixdown if it has a very large sustain. The use of Moongel is a true godsend because it allows you tackle all such issues right at the source. And considering it's very reasonable price, there's no excuse not to have it.