The comfort of the performer - Part 3

Third and final installment of the chapter dedicated to the comfort of the singer during vocal recordings. Today, for the first time, we will discuss the gear used. However, before looking at it from a technical point of view, I think it's better to linger a bit on the practical side of things from the viewpoint of the performer, so that he/she can deliver his/her best.

As I've been repeating the last couple of weeks, it is essential that the singer feels comfortable during the recording sessions. Yet, budding sound engineers have the annoying tendency to impose technical constraints on the musicians, like "get in there, play over there and, especially, don't move!" This is obviously well meant but it only takes into consideration the technical aspects of the recording and for a musician, regardless of whether he or she has prior experience in the studio world, this might feel like some sort of prison. Certainly not the best situation for a musician to give the best of him/herself. This applies to all musicians but it is especially so with singers for the different reasons I have mentioned since we began this chapter on recording vocals. So make sure that the technical conditions are not a constraint for the performer! Does this sound too abstract? Let's see a practical case to clarify things.

Take, for instance, the singer's mic. Ideally, you would want the singer to stand in front of a large diaphragm condenser mic with an anti-pop filter. Problem is that, in real life, some singers prefer to sing holding the mic in their hands and even move around. What can you do then? Well, in my humble opinion, rather than limiting them, you should let them be and find a technical solution that works, whatever the situation. To really drive my point home, let me tell you two personal experiences I've had. 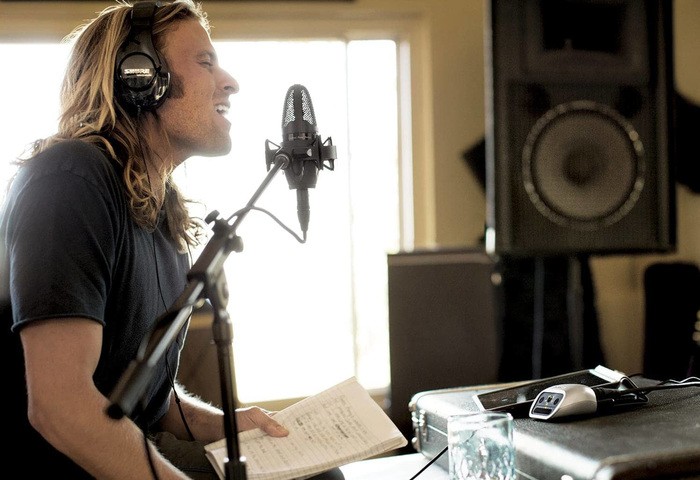 Some years ago I was working with a young rapper. Like many rappers he was used to rap with the mic in his hand and almost glued to his mouth, which is far from being ideal. I first tried to record him the "traditional" way, but his voice was incredibly dull, whereas live he shows the same edginess as Eminem in his good ol' times. It was obviously impossible to have him carry a condenser mic given the sensitivity of such mics to handling. So I decided to give him an SM58 and let him perform as he was used to. Plus, I doubled the recording using a C414 with omni polar pattern placed at about five feet from him. Combining both of these tracks and compressing it all we got exactly what we needed for the track we were working on: presence, air and, especially, expressiveness! Granted, technically speaking, when you listen to the voice on its own, the take is questionable. However, within the mix it works wonders. What else could you ask for?

Along the same lines, I once had to work with a singer who liked to bob her head left and right when she was singing. The place we were recording in was a bit small and had more than questionable acoustics, so it was impossible for me to place the mic further away to try to minimize the frequency impacts of her untimely bobbing… But then I had the idea of using three identical mics placed in a semicircle around the artist's head. And I also filmed the different takes with my cell phone placed on a stand. During the editing session I began syncing the video to the different takes and edited them choosing, for each phrase, the mic towards which her head was tilting at that particular moment. The final comping was simply amazing and you'd never imagine the vocals were recorded in such a complicated manner!

I hope with these examples you understand the importance of being creative to make the life of the singer easier in order to get "the take." After all, isn't it part of the audio engineer's job to find technical solutions that serve artistic expression? I personally believe so.