The comfort of the performer - Part 2

Second part of the chapter dedicated to the comfort of the singer when recording vocals. After discussing the place last week, today you'll see some really nice tricks that will allow the singer to feel more at home easily.

Today's idea relies on a relatively basic and simple reflection: the experience of recording in a studio is not natural to the musician, generally speaking. To put a remedy to that, it would be logical to try to emulate as close as possible the conditions where he/she is used to performing, isn't it? Well, what do you know, there are some nifty tricks to achieve that which I think are particularly effective.

First of all, it would be good to know in which "social" context the singer feels more comfortable when singing. Is he/she the type who likes to sing on his/her own in the bedroom? Or does he/she like to have his/her friends around? Does he/she need the excitement of a live show to get the best performance out of his/her vocal chords?

Depending on the answer to this questions you will be able to know how to deal with the recording sessions with him/her. In the first case you would need to limit the presence of other people during the session to the strict minimum. Ideally it would be only he/she and you and you could even try to make the singer feel that you are not looking at him/her during the takes. In the second case, the presence of his/her friends give him/her reassurance. Finally, for stage junkies, a small audience picked on the fly ought to be more than enough to get him/her ready for the show.

All of this might seem like a triviality, but I promise that it systematically makes a huge difference on the performances of the vocal recordings I'm involved in! 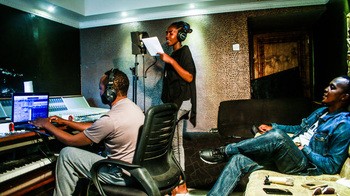 Another trick that might work, if the singer is used to playing with an instrument, is to let him/her play the instrument while recording. If he/she is more used to accompany himself while playing, why shouldn't you let him/her do it? Besides the comfort it represents, you could actually kill two birds with one stone if you have enough gear to record the vocals and the instrument at the same time. The flip side is the eventual bleed issues that may arise, but there's a way to reduce this to the minimum. If the singer plays electric guitar at the same time, you could just track the guitar with a DI box and send the return to his/her headphones through a virtual amp, for instance. If it's an acoustic guitar we're talking about, you could play with the polar patterns of the mics to reduce crosstalk, as I've mentioned in a previous article. If the singer plays piano, ask him/her to play a master keyboard with a virtual instrument rather than a real piano. It's certainly not the same but it will bring him/her closer to his/her comfort zone. I guess you get the idea: despite any eventual crosstalk issues, if the singer feels more at ease playing an instrument when performing, let him/her do it and try to minimize bleed as much as you can. Trust me, the jump in quality of the performance is worth it.

And that's it for today. Next week we'll close this chapter dedicated to the comfort of the singer by looking at the gear in itself.