Hard disk recording techniques have affected every aspect of recording, including vocals. Although overdubbing vocals has been a common technique for years, today's programs let you do multiple tracks of vocals, and make a "composite" with all the best bits. We'll cover how to do that, then talk a bit about compression and reverb.

Cutting and pasting has benefited vocals, as you can do multiple takes, and splice the best parts together to make the perfect "composite" vocal. Some producers feel that stitching together vocals doesn't produce as natural a "feel" as a take that goes all the way through from beginning to end, while others believe that being able to choose from multiple takes allows creating a vocal with more range than might occur with a single take. If you want to try composite vocals, here are the basic steps.

Record enough takes so there's plenty of material to piece together a good performance (loop recording is particularly handy for doing vocals). While you're in a recording mood, record a little bit of the track without any input signal. This can be handy to have around, for reasons described later.

Audition each take, and isolate the good parts (by cutting out unwanted sections). I recommend setting loop points around very short phrases.

Solo each take, one after the other. If you're not going to use a take, cut the phrase. If a take is a candidate for the final mix, keep it.

Pick the top 3 or 4 candidates, and remove the equivalent sections from the rest of the tracks. Now repeat this procedure, phrase by phrase, until you've gone over the entire performance and found the best bits

In Sonar, several takes of vocals have been recorded. A mute tool has muted portions of each track (the waveforms are shown as shaded), with the remaining parts making up the final vocal.

Next, listen to combinations of the various different phrases. Balance technical and artistic considerations; choose parts that flow well together as well as sound technically correct. Sometimes you might deliberately choose a less expressive rendition of a line if it comes just before an emotional high point, thus heightening the contrast.

Once you have the segments needed for a cohesive performance, erase the unused parts. If you want to archive everything "just in case," go for it. But if after putting the part together you think it could be better, you might be better off re-cutting it than putting more hours into editing. 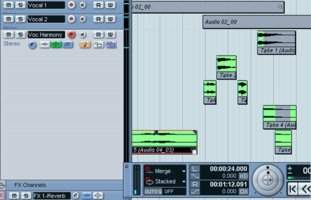 Several takes of vocals were recorded into Cubase SX, and edited to create one final vocal. The program shows the elements that make up the final vocal by highlighting them in green.

This isn't absolutely necessary, but converting all the bits into a single track simplifies subsequent editing and processing.

This is also where the recorded noise might come in handy. Sometimes I've had to do a quick fade on the end of one segment, and a fade in on the beginning of another, leaving a dead silent gap between phrases. Layering in a bit of the noise signal gives better continuity, and keeps the part from sounding too "assembled."

After everything's set, implement the program's bounce or mix to hard disk function. You can typically bounce to an empty track, or "render" the audio to disk and bring it back into the project.

At this point, I bring the composite track into a digital audio editor for clean-up. Here are some typical processes:

Tidy Up Your Hard Disk

After the vocals are done, check how your program deals with deleting unused segments, as this can reclaim significant space from your hard drive.

Compression has other uses, like giving a vocal a more intimate feel by bringing up lower-level sounds. No matter what your application, though, don't squeeze the dynamics so much that you also squeeze the life out of the vocals. Here are some tips on optimum compression settings.

Nothing "gift wraps" a vocal better than some tasty reverb. My favorite reverb for voice is a natural acoustic space, but as reverb rooms are an endangered species, you'll likely use a digital reverb. Reverb settings are a matter of taste, but two parameters are particularly important. 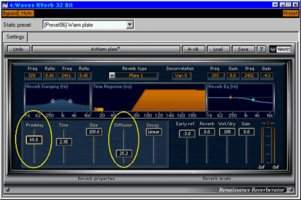 A reverb's Predelay and Diffusion parameters are crucial to getting good vocal sounds. This reverb, the RVerb plug-in from WAVES, offers an exceptional amount of control.

Diffusion: With vocals, I prefer low diffusion, where each reflection is more "separated." Low diffusion settings often sound terrible with percussion, as the individual echoes can have an effect like marbles bouncing on a steel plate. But with vocals, the sparser amount of reflections prevent the voice from being overwhelmed by too "lush" a reverb sound.

Predelay: This works well in the 50-100 ms range. The delay allows the first part of the vocal to punch through without reverb, while the more sustained parts get the full benefit of the reverberated sound.

← Previous article in this series:
From the Basic to the Esoteric, Here Are Proven Ways to Enhance Your Vocals
Be the first to post a comment
0