Additive Synthesis ─ Give me more!

In the previous article we saw what subtractive synthesis, the most widespread method of synthetic sound creation, is all about and we saw that it's based on the sound production and manipulation modes described in the first articles of this series.

Unlike subtractive synthesis, which consists of taking away elements of an harmonically rich audio signal, as if you were sculpting a marble statue, additive synthesis is based on the principle of stacking up simple audio signals to create a richer sound.

This procedure rests upon the work of one Joseph Fourier, whom we have briefly mentioned in this series before. Remember, it was he who discovered that all complex signals can be reduced to a group of sine waves. And he quickly came to the idea of doing the exact opposite to recreate the complex sounds previously analyzed, stacking up their basic sine waves. It's important to note, however, that the solution to every analysis has some limitations and, thus, it's impossible to reproduce identically a sound previously analyzed. But the principle behind additive synthesis had been applied to music way before Fourier formulated a theoretical basis for it.

In fact, you could argue that one of the first instruments of additive synthesis was...the pipe organ! And there are several reasons for that.

First of all, the sound produced by an organ can be sustained indefinitely, like any simple wave in sound synthesis. Plus, its amplitude doesn't vary as long as you hold the key, unlike the piano, for example.

The second, and most important, reason is how the instrument is organized in different "sets" or groups of pipes, each of which produces a particular timbre. These groups ─ and, thus, these timbres ─ can be mixed and balanced at the will of the organist with the famous drawbars. The Telharmonium, the first instrument of the modern ─"electric" ─ age, appeared in 1896. It was invented in the U.S. by Thaddeus Cahill, who would manufacture a second version in 1906. This huge instrument, which weighed 7 tons (and which transmitted sound via phone lines!), worked according to the principle of tone wheels, where a notched disk turned in front of a coil (like on electric guitars). The notches of the disk created periodical tension variations which were then translated by the coil into electrical voltage. The voltage was then transformed into sound with an amplifier. The frequency depended on the rotation speed and the number of notches on the disk.

And what's the relation to additive synthesis, you ask? Well, the Telharmonium was capable not only of producing fundamental frequencies, but also a given number of harmonics, thus, modifying the overall timbre by adding additional frequencies.

This same principle would be taken up in the 1930's by Laurens Hammond to manufacture the celebrated organs sporting his last name ─ the B3 being the most acclaimed model. 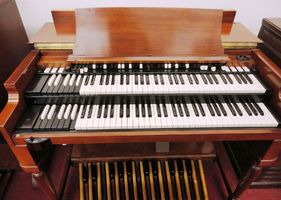 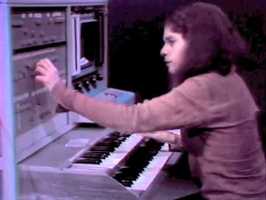 But the first true additive synthesizer would be the Bell Labs Digital Synth (aka Alles Machine or simply Alice) invented by Hal Alles in the 1970s.

This synth had a particularly complex architecture based on 72 digitally controlled oscillators ─ a part of which was dedicated to producing fundamental frequencies while the rest produced harmonics ─ 32 programmable filters (ah, the joys of subtractive synthesis!) and 256 envelope generators. Without the advent of digital technology, it would've been unfathomable to handle such complex settings (see article 10 regarding polyphony).

Meanwhile, the engineers at Fairlight were working on the Quasar M-8, which would allow the synthesis of any sound in real time by adding an almost unlimited number of harmonics. However, this noble project ran into the technical constraints of the day. Paradoxically, although the principle of additive synthesis is the oldest (as mentioned regarding the pipe organ), it's still the most complex to put into practice.

The people who started the M-8 project decided to "cheat" in a way, and change their focus to the development of the Fairlight CMI (Computer Musical Instrument), the first machine that worked based on the principle of sampling, which we will discuss in the next article.

One of the most popular units using additive synthesis is the Kawai K5, which was released in 1987.

Its exceptional synthesis capabilities (based, among other things, on the possibility to choose from among 126 harmonics for each fundamental frequency and assign them separate envelopes) even managed to make synth players forget its user-unfriendly and not very intuitive design.