The final export of your mix

Dear friends, believe it or not, our epic saga through the wonders of mixing is slowly approaching its end. Nevertheless, before we get to the final stop we still have to look into some details, starting with the export of your mix. This crucial stage might seem very easy at first glance, but there are some technical precautions you need to take so you can send master your babies worry-free.

The first thing to do is to set the beginning and the end of the export as precisely as possible. I know it seems obvious, but a mastering engineer friend of mine recently told me that it's not uncommon for him to receive tracks with issues regarding this. To avoid any problems at this stage, I recommend you to set the start at least one second before the first sound begins. And when it comes to the end, pay special attention to any reverb tails or delay repetitions that could go on even after the final note has been played. Personally, I always add one second after the final audible sound, be it the final note played or the tail of an effect, just in case.

The second thing you need to check is your Master bus. Remove any plug-ins that are unnecessary. I'm thinking, for instance, about the plug-ins used during the critical listening sessions. Just imagine for a second that you still have a plug-in on the Master bus that limits your mix to a mono signal or a single frequency range! The same applies to plug-ins such as IK Multimedia's ARC or the equivalent by Sonarworks to improve the listening conditions in your studio... They shouldn't be there when you make the final bounce of your mix. I know this advice is just as obvious as the previous one, but erring is human, so I prefer to play it safe and not take anything for granted here, as insignificant and obvious as it may seem, to help you avoid any mishaps I've personally experienced first-hand. 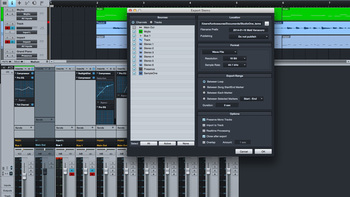 Along the same lines, if you use a brickwall limiter at the end of your Master bus for safety reasons, to protect your gear from any unexpected events during mixdown, now is the time to take it out. In fact, if you've been following the advice given in this series of articles, your mix shouldn't be even close to reaching the dreaded red LEDs signaling the overload of the main bus. And, anyway, since there shouldn't be any change of settings during the export that could disturb this situation, what sense does it make to leave it on?

And this leads me to the next important point: the headroom. Your mix should have a headroom of at least 6 dB for the mastering to run as smoothly as possible. In other words, the highest peak of your track should hit the -6 dBFS mark on your Master bus. Furthermore, the dynamic headroom, i.e. the difference between the highest peak and the lowest dip should be somewhere between -14 dB and -10 dB. If that's not the case, you are still in time to fix it, otherwise the mastering engineer will have a hard time trying to properly work on your mix. But I wouldn't worry too much about it, considering that ever since the beginning of this series we have taken every precaution necessary to make sure that you would get a suitable mix in this regard.

Let's move on now to the export itself. The choice of format will depend on the requirements of the person in charge of the mastering. So make sure you have talked to him/her about it before sending over your mix. If you decide to take on the task yourself, I recommend you to use a 32-bit floating-point WAV with the exact same sampling rate as your mixing project. During export, several DAWs offer you the possibility to choose some sort of dithering, which is something that should be applied exclusively at the mastering stage. So make sure all dithering options are disabled.

Finally, one last listen of the export file before sending it to the mastering engineer, to check everything is the way it should be, can't hurt. After all, it would be a shame that all your efforts so far go down the drain due to a last minute mistake, don't you think?

In the next article we will continue discussing the export of your mixes, looking at the different versions you might want to consider making, anticipating what the future might hold in store for you and your work...