Artistic automation or what you can learn from movies

So, what can you learn from the movie analogy from last week? That's what we are about to see right this moment!

Considering the mise en scène, the first learning has to do with the organization of the discourse of each of the actors. Be it monologues or dialogues, it is important for each of the participants to have a specific time reserved for them, otherwise it might all end up being unintelligible. When it comes to music, the main actors are usually the vocals and solo instruments. Would it be wise to have a solo above the vocals? Or two solos going on at the same time? Obviously not. It's up to you to make them all fit together in the best possible way, be it with the appearance of licks between vocal phrases or have the solos in a question/answer format, etc.

Some of you might be thinking right now: "But that has to do with the arrangement, not the mix!" And it's true, it has to do with the arrangement. And actually, if the song you are mixing was properly arranged from the start, you will certainly have less work to do when it comes to automation, But if that's not the case, don't think twice about making drastic decisions as long as it is for the benefit of the music, not for the ego of a musician, the composer or your own.

Another thing to consider regarding the mise en scène is the placement and movement of the characters. The appearance of a key character won't have any impact if he or she is hidden behind a furniture at the back of the set. He or she would need to take center stage for the audience to grasp his/her full intention and also capture the details of his/her performance. And it's also obvious that once that character is done with his/her part of the script, he or she should give way to the rest of the characters and not meaninglessly obstruct the stage. This dance of characters is crucial to the development of the musical story, so make sure to pay special attention to it. 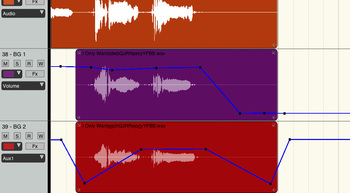 The lessons to learn from the scenery might be a bit more abstract at first glance. The changes in the background are seldom noticed consciously by the audience. However, you shouldn't underestimate the emotional impact of this delicate art! Imagine for instance a musical comedy where all of a sudden the actor/singer stands up to start singing. It shouldn't take you too long to understand that, regardless of the musical style, the effect of the performance will be completely different depending on whether it takes place in an empty cafeteria or in a crowded one where everybody is minding their own business or whether in that same cafeteria everybody starts dancing to the music at once.

In a musical context this implies the use of the accompanying instruments. The performance of the musicians, the groove of the song and the density of the arrangement obviously play a big role in the creation of this atmosphere. Nevertheless you should not overlook the extent to which the variations that you can make to the musical setting can effect the sensation of liveliness of your mix, be it with or without automation. But be careful, and make sure that none of the backing instruments steals the show from the main actors, that's not the goal. Always bear in mind the film of your mix and stick to it so you don't get derailed.

Let's finish this episode with the direction, in the broadest sens of the word. Imagine the following scene: two students sitting on a couch in the darkness. If the following scene is a close-up of their hands barely touching each other everybody will be able to infer what is about to happen. However if the next scene is a close-up of the doorknob slowly turning, everybody will be expecting something completely different. At the same time, the impact of the opening of the door will be completely different depending on whether the lights are switched on right away or not, and if the light is warm or cold, etc. In short, the framing, the planes and the cinematography have a very important role in the dramatic development of the musical story. From a strictly musical point of view, this can be reflected at the level of the arrangement, the performance of the musicians and even the composition itself. But artistic automation can emphasize the impact of all of this and even create this kind of effect from start to finish in order to help the story flow seamlessly while never losing the attention of the listener.

Next week we'll see in detail the different options at your disposal during automation that will allow you to give the finishing touches to your mix.