After having discussed the functional aspect of automation, it's time to look at it from an artistic point of view.

But I have suddenly realized that I failed to explain to you why I make a distinction between these two types of automation. The reason is very simple: the idea is to raise the quality with regard to the time you spend doing things. In my experience, it's better to gather all purely technical aspects and get rid of them before moving on to the artistic side of it. This way, you have more creative freedom, because you are not being constantly interrupted by any "behind-the-scenes" issues. You might think this not really that relevant, but give a try, I can guarantee you'll be blown away by the results, not to mention the peace-of-mind that this way of doing things provides.

But before we begin with artistic automation, I invite you to review the film of your mix we talked about in the beginning of this series. Taking the film analogy one step further, you could say that right now the casting is done, the actors know their texts by heart and the set is ready. But that's not enough to make a film worthy of the name! You still have to work on the mise-en-scène, scenery and direction, obviously. Yes, I know that sounds a bit abstract, so let me explain what i mean.

According to French film director André Antoine, mise-en-scène is the "art of drawing on the boards the action and the characters imagined by the dramatic author." Right now your actors/instruments know when they come on and off stage, but they still don't know how: very swiftly without getting noticed or with a bang? And while they might know what's their starting position someone has to guide their movements throughout the entire scene. In fact, if everybody remains nailed down to their places without moving throughout the entire movie, your audience might suffer a yawning crisis. 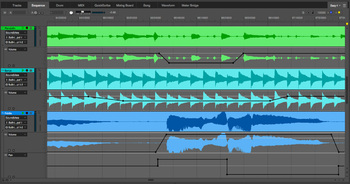 And the same applies to the scenery. If the setting never changes, you might kill your spectators of boredom. Subtle movements, even if only in the background, or even a complete change of scenery will help you keep your audience's attention.

Finally, direction make the different scenes fit together. In our case, that means making sure the bridges, choruses, verses, solos, etc. blend in nicely together. Regardless of whether they are abrupt or gradual, these changes are crucial to the climatic development of the song.

Remember that your music is telling a story. And the goal of artistic automation, like everything else we've done so far, is to help the emotional message behind the story come through as clearly and accurately as possible.

In the next two articles we'll look into what we can learn from this analogy, as well as into the tools that artistic automation puts at your disposal to help you meet your goal. Until we do that, I invite you to study carefully the script of your film, in other words, the notes you wrote when we started this adventure together, because you will need them.