Critical listening outside your studio

The home studio environment is usually pretty far from the ideal conditions of a commercial studio, so it's strongly advised to check your mixes outside of your work space. With that in mind, today's article will be dedicated to a "classic" way of approaching this critical listening stage "outdoors."

Let's begin by asking ourselves the usefulness of this process. I don't think it would be wrong for me to assume that if you are following this series you are not a professional audio engineer. So regardless of whether you are a full-time musician or a carpenter, you probably hear music primarily outside of your beloved home studio. In fact, your studio monitoring system, as "perfect" as it might be, is probably not the system you master the most. So it's only reasonable to judge your mix on a system that you know like the back of your hand. It doesn't matter if it's the hi-fi system in your living room, the small Bluetooth speaker in the kitchen or you car's stereo – a classic if there ever was one. The idea is to use the playback device you use the most. And don't worry about whether it's mono, or if the engine of your car makes too much noise, nor about the awful acoustics of the place you listen music in. Again, what matters most is your experience listening to music in that familiar environment. After all, that's where you enjoy all those masterpieces you like so much, so why not run your own mixes through the same audio system? This is by far the best way to check whether your mix still has some issues, since you ought to be used to consuming music this way.

Okay, now that we've all agreed on the benefits of this, let's see how you should go about. 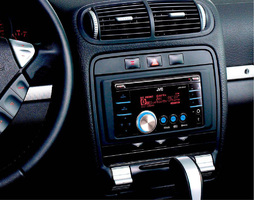 If you want to listen to your mix outside your home studio you have to export it as a stereo file, then transfer it to an appropriate medium (CD, USB stick, etc.) depending on where you will be listening to it. I don't think there's any need to tell you that compressed formats are a no go. MP3 and the like are to be avoided. Use WAV or anything lossless instead. If converting your mix into a stereo file involves reducing the resolution due to the inherent limitations of the playback system, for example going from 24-bit/48 kHz to the standard 16-bit/44.1 kHz to burn a CD, make sure to activate the dithering or you will end up with more or less ugly artifacts in the stereo file.

Besides the file format, you must also consider another important issue related, as usual, to the perceived loudness. Probably all of the songs you listen to on the system where you usually playback music have gone through some sort of mastering process, unlike your own mix.

You can solve this in two different ways. First, you could do some sort of "home mastering" on the fly so your mix is at the same level as the "competition." However, I don't really recommend this method, even if I sometimes resort to it when I have to send a mix to a client who might not know why there is such a difference in terms of loudness. Why, you ask? Well, because you are among the people who are aware of this psychoacoustic phenomenon, which should protect you from any misjudgments in this regard. And most importantly, because it's no easy task to try to separate the problems affecting your mix which are in fact due to the mix from those due to having mastered it in a rush. In short, it can be quite counterproductive.

The other way to approach this, which I prefer by far because I believe is much more respectful of the mixing process, goes like this:

One last remark before we call it a day: My listening sessions "outdoors" start systematically with what my ladylove has appropriately dubbed "ear washing." In other words, I always begin by listening to one of the reference songs to "reset" my ears with a mix I'm sure sounds good, before I move on to my own work. This makes a lot of logic to me, but I know several audio engineers who don't think the same... go figure! I'll let you experiment with this and see what works best for you... until next week when we'll see yet another technique to listen to and assess your mixes outside your home studio.