Go Safely and Back Up

Before getting into the heart of the matter, I deem it necessary to deal with a subject that isn't only limited to computer music, namely backups.

In the all-things-digital era, the need to regularly back up your files in order to protect yourself against any unforeseen inconveniences is obvious. However, most people who actually think about backing up their files settle for a simple copy on an external hard drive...And yet, this is far from being optimal when it comes to protecting you from the hazards of life, not to mention the more than shaky implementation. Considering that you can't ever be "100% safe," we'll see how relatively easy it is to set up a backup strategy that will allow you to sleep peacefully at night.

Let me tell you a story...Jacky is an amateur musician who is equally passionate about computers. Swinger at heart, he formed a big band with several people of his region that he met online on a well-known specialized website. Everything went smoothly with the band, which led Jacky ─ that relentless Jack of all trades ─ to get into music production to immortalize one of their performances in the backroom of the shack where he installed his home studio. The recordings went pretty well, everybody had a blast and they were are all dying to share the fruits of their erratic jazz with the largest number of people possible. 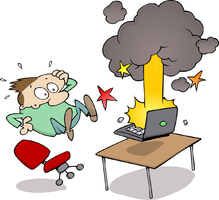 But Jacky reminded everybody that the not-insignificant task of mixing all the tracks was still not done. So, once again, it's Jacky who put himself to the task during a stormy and lonely evening with his eyes fixed on the computer screen and watchful ears. After being several hours dedicated body and soul to the mix with the help of the EQ...Oh my God! Jacky pushed his computer too far! Was it the excess of resource-hungry analog plug-ins, the excessive heat that ensued, the atmospheric humidity due to the storm? Who cares, the computer just died in his hands and the hard drive is no longer responding.

Fortunately. being the type who likes to take precautions, Jacky had a "life insurance,"go figure! As an Apple fan, he likes to work more often on his Mac than on his PC and the former makes an automatic backup to a hard drive connected to the local network thanks to the Time Machine feature. This means that he could restore in no time the latest backup made, even if the last couple of hours were lost, he was sure he would be able to recover the recordings. But...while his home studio is connected to an inverter, that's not the case for his entire computer setup. And, naturally, the storm caused several power cuts which proved to be fatal to the backup drive.

Jacky was definitely down on his luck! However, he remained unshaken because he still had some tricks up the sleeve. He had a DVD Ghost of his hard drive which would allow him to reinstall the unit in a wink of an eye. As for his own data, he had the great idea of investing on a so-called off-site backup software. Every night, the latter sends a copy of his files to a friend, which, in this case, turns out to be Michel, a very active member of Jacky's big band. Do note, that unlike Jacky, Michel is more of a PC fan, which doesn't affect the exchange of data in the slightest, Mac and PC work together seamlessly in this case. So, since Michel happens to live nearby, Jacky paid him a visit to recover the data the next morning. But luck simply didn't seem to be on his side that week. While the storm only caused a couple of power cuts at Jacky's, the story was completely different just around the block. Poor Michel's house was flooded and, obviously, his hard drives were part of the casualties...Bye-bye off-site backup.

Jacky started to think he had been jinxed and was completely disheartened. But, fortunately, Michel is also farsighted! His most important files are synced to a free account of a well-known cloud storage service. As a consequence, they only needed to use a browser to go online and download the files. As you have probably inferred, the story doesn't end happily here. Once everything had been recovered, Jacky loaded the session with all the recordings to verify that everything worked fine. But something seemed suspiciously wrong and Jacky doesn't like suspicious things because they often leave a bad taste in your mouth. And, go figure, the evidence at hand showed that some tracks were strangely missing. How could that be possible if the cloud storage service is supposed to automatically and flawlessly sync all files assigned to it? The answer is easy: Misuse by the user. Indeed, Michel inadvertently erased one of the folders on his computer and this significant mistake affected what was stored on the cloud. Since it's a free account, he couldn't use the extended history feature and the recordings concerned seemed to be lost forever...

This time, Jacky was really pissed ─ pardon my French! After all his adventures he had run out of gas and didn't have the energy to call in the whole band to take on the recordings again. And yet, Jacky's vivid Odyssey would have a triumphant twist. It just so happens that as clumsy as Michel is, he is also extremely careful. Thus, he just didn't settle for the cloud sync service used by everybody, he also subscribed to an unlimited online backup service. Although less versatile than the "classic" cloud solutions, in case of emergency it's really worth it. So, in the end, the two friends were able to recover all the recordings and sit down to mix their songs in all tranquility to get something worthy of being listened to.

Believe it or not, as Barney Stinson would say: True story. I only changed the names of the characters to respect their anonymity. Although I must admit that this extraordinary story will go down in the annals of history! And what can we learn from all this?

The moral of the story…

Well, first off, a good backup strategy starts with automating a local copy to reduce the risks inherent to human carelessness. Time Machine is great at that. If you work on a PC, don't worry, there are heaps of alternative solutions and a simple online search will surely allow you to find something that fits your needs.

However, as we just saw, this backup is far from being enough. It is strongly recommended to do regular or ─ even better ─ automatic off-site backups to a friend's computer, for example. To that end, I use the free version of Crashplan. You have to be careful when you choose the person you do backups with, though. If you don't want to be ruined by natural catastrophes, choose someone who is far enough from you, geographically speaking. 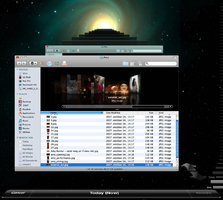 As for cloud solutions, they are definitely a plus. Dropbox, OneDrive, hubiC, and others all offer more or less transparent solutions to sync to the cloud. However, they aren't really meant for backup, but rather to sync files. It's a way to "mirror" your files, so the slightest mistake on your part will have an effect on the cloud and since the history features of such services are usually limited, you should be cautious.

In the worst case scenario, your life vest could be a paid online backup service like BackBlaze or Crashplan, for instance. There are many others, obviously, but these two have an excellent reputation and are also among the less expensive ones.

Finally, consider making a Ghost DVD of your system when it is in top shape, just in case. And don't hesitate adding it to you online backups.

By using this strategy you will probably be able to cope with almost any situation without any major losses, as Jacky and Michel did.

After all their adventures, you may be asking yourself whatever became of our two heroes and their big band. Well, they did manage to finish their mix! And they put up a website from where they publish their work in order to enlarge their circle of friends. I invite you to discover them here!

And I'll see you in the next episode! And don't worry, next time we will finally start to address mixing in a more serious and dedicated way!