Today we'll look into a concept that's relatively simple to understand and which will be of a lot of help when you automate your mixes. 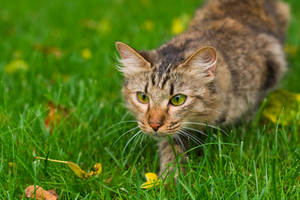 As you have surely guessed by now, one of the main challenges of automation consists in capturing and, especially, not losing the attention of the listener during the entire song. Unfortunately, that's easier said than done. And it's even harder when the track you're mixing is "simple" in terms of composition and/or orchestration. However, it's by no means impossible, as we already saw when analyzing Metronomy's The Look. To help you in your quest for attention, I think it's important to keep something in mind: Despite thousands of years of evolution, human beings remain nothing more than animals.

And what does that have to do with mixing, you ask? That's easy to explain. Animals can be either prey or predators, or even both in most cases. In order to survive, nature has provided them with senses that allow them to analyze the world. Be it the sense of hearing, smell or sight, theses senses exist for two reasons: To help animals notice any eventual dangers due to an approaching predator and to notice the slightest quivering produced by a potential prey. That's why the weakest sound, faintest odor or slightest movement naturally attract the attention of animals. You don't believe me? Think about the reaction of a cat when you swing a string ball in front of it... Now you know what I mean, right? It's a reflex, an instinct that's stronger than us. Yes, I did write "us," because human beings are an animal like any other. And you can use that to your benefit when mixing a song, automation being a fantastic tool to achieve that goal!

There's nothing easier to take advantage of our auditory animal nature than the appearance or disappearance of an instrument in a mix, the moving of an instrument across the soundscape, or even a change of "color" of all or part of the song. But beware! Even if a tiny change on the background can do the trick, you'd better keep it discreet unless you want to steal the show from the star of the mix. The goal is to captivate the listener, to distract him from the most important things. Another thing to bear in mind is how often you pull these tricks, because you risk tiring your audience if you do it too often. Just imagine a violin bouncing from side to side of the stereo field: There's nothing better to make your listeners dizzy! Once again: subtlety is the name of the game here! It wasn't a joke when I said that automation is an art in itself...

Next week we'll see some tricks that will help you take a greater advantage of our animal nature by automating certain parameters.