To close the chapter on automation I'll start listing today some advice and remarks I haven't mentioned before, but which I nevertheless deem important and useful.

Since modern music often relies on easily identifiable structures, it makes sense to approach automation with that in mind. In fact, automating by section (intro/verse/chorus/break/solo/outro) allows you to easily highlight the differences between the sections. Besides, if you move step by step, from the chorus to the next verse, it allows you to keep some cohesion between the sections despite their differences. Do note however that it's better not to work in a linear way (intro to verse, to chorus, etc.) or you could find yourself without too much room when you get to the busiest parts of the song. It's actually easier to start with the climax of the song and then move step by step in any direction you want. And if the song allows it, you can also consider grouping all instruments of a given section in a bus. This way of doing things gives you more flexibility when connecting the different sections, because you can change the volume, the overall color, the stereo width, etc. independently with each of these buses.

The advent of in-the-box mixing was a true blessing for automation. All modern DAWs feature tons of functions to make the audio engineer's life easier in this regard. Unfortunately since such functions are specific to each software I can't really go through all of them here. So take a look at the possibilities your sequencer offers, it could spare you some headaches and precious time. To give you an idea of what I'm talking about, here's a list of some of the functions you might find. 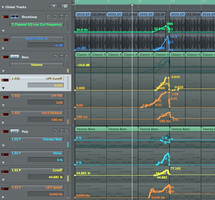 Most DAWs have a feature to copy and paste all or part of the automation data written. And as we just saw, the structure of modern productions is oftentimes built around clearly identifiable blocks, which usually repeat over and over throughout the entire song! So it can be useful to copy the automation from one of these blocks and copy it into another. But do bear in mind that to retain the attention of the listener you should introduce some variations to the automation, which isn't too hard to do if you start from an existing automation block.

VCA is unfortunately not present on all DAWs, but if yours does have this feature, I strongly recommend you to use it because it's very powerful.

Another interesting function is the grouping of certain parameters from several tracks. DAWs with this feature allow you to link parameters such as volume, mute, solo, and pan of several tracks. This can prove incredibly useful when automating in real time, especially if you don't have a control surface worthy of the name.

Lastly, another very practical tool is the variation of parameters depending on the signal of the track to be automated or even another track. Think about the dry/wet level of a reverb which adjusts according to the level of the vocals, or the EQ of an instrument that goes on only when another instrument is present... all automatically, without the need to automate anything. A very powerful tool!

So, yes, it might be worth reading the automation chapter of your DAWs manual. See you next time!