Today I'll give you some final recommendations regarding automation.

It might happen that despite all your efforts during the recording and editing stages, there are still some performance issues left. Well, it just so happens that automation is an excellent tool to tackle them! While it is not uncommon for everybody to mess up at the same moment live, that's not the case when recording something track by track. Consequently, when a single instrument has messed up, automation can come in really handy to highlight another instrument right at that moment to mask the blooper. Only an expert will be able to discover the trick, under optimal listening conditions and being sharply attentive. The principle applied is none other than that used by an illusionist doing magic: to distract the attention of the spectators the right amount of time to do their tricks. And we all know how effective that can be. 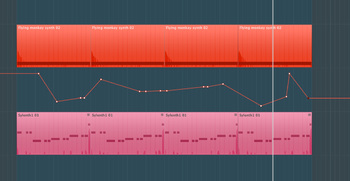 Regarding automation in real time, I recently bumped into a colleague who uses a method I had never thought of before. He starts by drawing on paper a sort of "score" for the automation. He then "rehearses" several times to try to follow the score as closely as possible and finally write the automation, as if it were a true performance. I've tried it a couple of times and must admit that following the score is pretty comfortable and provides very good results.

To finish, after reading all these articles you will surely think that I'm a strong supporter of automation at every stage. While it's true that I consider this aspect to be the most important of a mix, I am not obstinate and, in my view, there should be a good relationship between the time you spend doing it and the quality of the result you get. Hence, I recommend you to cultivate a critical mind and your sense of practicality. When a given element requires too much automation, it's often wiser to duplicate it and apply new settings to the copy so that the only thing you have to automate is the passing from one to the other via a single parameter. This applies to instrument tracks and aux buses, and even to the effects themselves. After all, your DAW is only limited by the capacity of your computer, so there's no need to restrain yourself if your machine can handle it. However, do bear in mind that it would be silly to apply this method systematically when there's at least a couple of parameters to automate because even the most powerful computer will end up giving up, while your mixing session keeps on surging unreasonably, soon becoming unmanageable. So be reasonable!

Join me next time to resume our adventures in the art of mixing!