Last part in the chapter dedicated to learning. Some of you might think that today's topic is an apology of truisms, but that's not going to stir me from writing what I'm about to write, because I think it is a cornerstone of pedagogy.

Unless you bump into a Radiohead fan or a particularly annoying person, anybody you ask how much 2+2 is will answer 4 without giving it a thought. It has become sort of a reflex, just like breathing, with the difference that the former is an automated response and not an innate mechanism. You didn't come to this world knowing that two plus two makes four. You learned it, and this learning was made in such a way that this association is instinctive today. Wouldn't it be great if mixing would come just as natural? Well what do you know, it is possible. It's not much more complicated, as long as you are patient and hard-working.

How did you learn that two plus two makes four? Chances are you don't remember because it was so long ago, right? But do you really think it took you one single morning during elementary school to get it right? And do you remember what's the antiderivative of 1/x you learned in high school? Obviously not. What can you gather from this? That boning up is clearly not the best way to retain something in your head long enough so that it becomes a sort of reflex. Rather than trying to learn everything in one go, you'd better distribute your efforts over more time, repeating your work on every occasion. To take an example within the scope of mixing, instead of spending five hours straight learning how a compressor works, it's probably better if you do shorter, half-an-hour sessions over ten days, for instance. This approach certainly takes longer and it's sometimes hard to stick to it. That's why I said before you needed patience and hard work, but I can guarantee you that it's much more worth it in the long run! 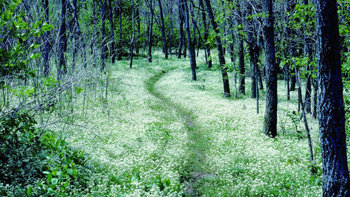 And to really drive it home, I'll finish with a metaphor that a neuroscientist friend of mine told me recently: In a way, your brain is like a grass field. When you learn something, whatever you learned goes into the field and flattens the grass in its path. But in time the grass always rises again. Even if you stomped upon that same path for hours without stop just once, in the end the path will end up disappearing. However, if you have threaded constantly over that same path for a long time, even if it's just some minutes, the grass will not be able to rise again. What's more, the path will become wider and more easily walkable in time and, in the end, the grass will have disappeared. In short, repetition and regularity are the key when it comes to learning how to mix, or anything else for that matter!

Talk to you next time!