Recording electric guitar - With or without effects? - Part 3

Granted, the techniques you saw last time are not exactly meant for beginners. That said, I think they allow you to get results that easily compensate for the headaches that thinking about the "routing" needed to carry them out entails. Today we'll look into a concrete use case.

Let's start with the scenery. The guitar riff I'll use today was conceived using an effects chain made up of a delay pedal (the Electro-Harmonix Memory Boy). The pedal doesn't have a tap tempo feature, so I had to adjust the delay time by ear as precisely as possible while playing the song. Recorded in the "classic" way, without racking my brains and simply putting a mic in front of the amp, I get something like this: 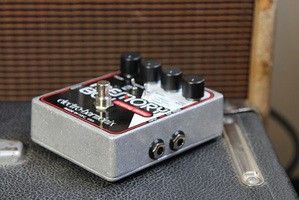 The result is not that bad and makes justice to the "live" arrangement of the song. However, when producing the recording of the song, I wanted to go further while preserving the "color" of the pedal, which I like so much. First of all, I think the delay time is a bit behind the beat. What's more, the delay line is a bit too present and "blurs" the main riff. Finally, unlike in a live performance, the sound of the guitar would integrate better into the recording if it developed along the stereo width rather than the depth. In short, it is truly impossible to try to make things the way I think they should be with this take. Fortunately, I went through the pains of splitting the signal right before the Memory Boy and I was able to use this "good" signal to apply the desired changes in no time!

On this clip you can hear more things. First of all, the size is defined by the separate recordings of the original riff and the delayed riff, thanks to some reamping! This allowed me to spread them across the stereo field so the sound develops across the horizontal axis, rather than the depth. I was also able to adjust the delay time so that it isn't behind the beat. Finally, I decreased the feedback level and I had always control over the dry/wet balance via the volume fader of the delayed signal track. Isn't that nice? And the cherry on the cake is that with this sort of manipulation you have much more flexibility! Listen to this example:

In this case I emphasized the difference between the original riff and the delayed riff with an EQ. I also used a transient processor to smoothen out the signal's attack to give it a light overall right/left swinging groove. And this is only the peak of the iceberg – as you can surely imagine, the possibilities are almost endless.

That's it for today. I hope this example gives you a better idea of why it might be wise to give some thought to the way you record an electric guitar with effects before actually putting it to tape. See you next time for some new adventures in recording!