The whys of using tape machine and console emulators

As you will see in the next episode, this type of plug-ins are generally used at the beginning of the mix, as the first insert on any track. But then how come I'm only mentioning it now? Was it a mistake on my part? Not really. I did it on purpose. But...why? Well, quite simply because I don't think this kind of processing is indispensable to achieve a good mix! 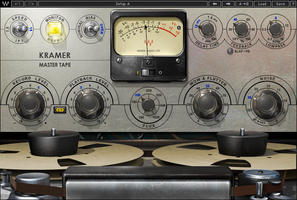 But don't get me wrong, some of these plug-ins are very good at what they do and I use them quite often, whenever I think they really add something to the song I'm working on. However, I think it's better for someone who's just starting out to learn his or her chops without using this sort of tools so they appreciate them better later on and use them wisely when the occasion calls for it. Especially considering that they can be a double-edged weapon. Indeed, while they can certainly make the mixing process easier thanks to the tonal coloration and dynamic impact they bring about, they can also mask some serious issues to unexperienced ears, which will only make things more complicated. Let me use a visual example: Imagine for a moment a video whose different planes don't have the same white balance, nor contrast level, etc. If you apply a sepia filter to this awkward image everything might seem a bit more coherent, but the problems will still be there and the budding film editor will have a very tough time trying to solve them, since he or she will be "blinded" by the sepia pseudo-varnish.

In short, I recommend you to avoid these tools until the point where you can actually create good mixes without them. Don't say I didn't warn you…

What good are they for?

Now that we've got that clear, what's the use of such plug-ins? Apart from the "vintage" and/or "analog" flair they bring into the equation, they also add some harmonic distortion to the signal. Hence, when used cautiously on each of the tracks, they provide a sonic cohesion which is enhanced by the addition of very slight background noise, too.

On the other hand, the tonal coloration and alteration of dynamics that results from the application of such plug-ins also allows you to use less drastic EQ and/or dynamic procedures during mixdown, which is always a good thing. But for that to happen, the sound engineer obviously needs to choose emulations whose tonal and dynamic characteristics match the overall vision of the mix.

Finally, the non-linear components of such tools can also add a subtle sense of "movement," as well as a more realistic sense of 3D space, making the song more "lively," for lack of another word to describe the effect.

More on this next week, when we'll talk about how to actually use these plug-ins.