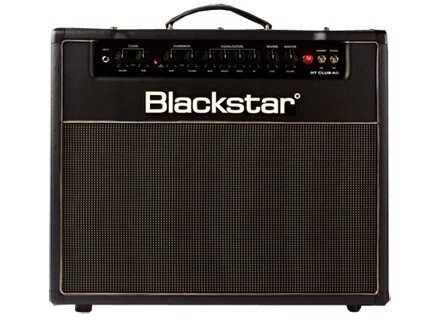 View other reviews for this product:
All tube combo amp 40w.

The overall quality of the amp is more than satisfactory, everything is finished, the footswitch is very solid, nothing to say. I would have liked a boost treble or volume on the overdrive channel, so be it'll have to add a pedal.

Configuration rather easy as long as you have the habit of tube amps. The clean channel lacks a bit of volume compared to the overdrive channel, we must know how to play the master and volume (thankfully separate).
It's still very plug and play if we leave the settings at noon, the rest is qu'affinage.

The ISF, but not revolutionary, truly acting on its type british (knob far left) seems more pronounced than the American type, probably because it is much more easily recognizable.

I advise all the same to put an equalizer in the loop, to enrich the sound but that I would speak a little later.

The sound of the HT Balckstar Club 40 is generally quite low in charge and mediums. The sound is very rock'n'roll afuté. Without EQ added, the clean is a bit flat, dry, is also a general characteristic of the amplifier. The grain is very fair, very musical but I found something was missing. That said, I think it comes largely from the fact that it's a combo 1 * 12, the sound can be the size of a 2 * 12 or 4 * 12.

Once added egualisation pedal in the loop (MXR 10-band here) the sound becomes richer and more nuanced. The amp retains its grain so charming, his enthusiasm and musicality but expresses it in a much freer, as if they had "unbridled" the beast. The approach really the best we can play almost everything and the ISF is here, its usefulness and its subtleties. Even the clean, rather average at the origin now becomes nasty and full of harmonics on my Tele and round the edge of the crunch on my LP. The overdrive allows the greatest variety from big crunch pumped type quay Orange at disto-type metal Pantera, Metallica .. I'd so plugging in a 4 * 12 one of these four to take me a good slap more.

I use it as a group for 7 or 8 months. I had a lot of combo lamps before it (Vox AC30, Fender Hot Rod Deluxe, Marshall JCM2000, JTM45 ..) is clearly the most versatile amp I had. Once egualisation pedal, the amp is really loose, the possibility of sounds are huge and all very believable in their registry. The personality of the guitar is respected. The value for money, unbeatable? Few amplifiers offering such diversity of sound and such quality for this price. The only competition might come from Bogner Alchemy but I have not had a chance to test it.
See the source
Did you find this review helpful?yesno
Cookies help us improve performance, enhance user experience and deliver our services. By using our services, you agree to our use of cookies. Find out more.