A real legend among electric pianos, the Rhodes has never stopped inspiring software developers and sample publishers. These 16 instruments are proof of that.

Sampled or modeled, the Rhodes has been rendered in many ways. However, developers and publishers seem to prefer, depending on each case, a Mark I or a Mark II for the most part, and sometimes more original models. One thing is for sure, there are enough options to choose from if you don't want to settle for the instruments included in many sequencers and ROMplers. And since the most expensive aren't necessarily the best in the eyes of the users, there is no reason not to indulge oneself with one of the most emblematic instruments in rock, jazz, soul, and blues..

The following list is presented in no particular order:

Conceived by one of the masters of sampling, this Rhodes Mark I remains, in spite of its age, the reference when it comes to virtual Rhodes, due mainly to the detailed sampling of certain characteristics of the original (release noise of each key, for example). Ideally complemented by Overloud's VKFX multi-effects plug-in (that was originally conceived to work with the Scarbee electric pianos), it is a definite must considering its very democratic price ($79 or $169 in a bundle together with the Wurlitzer Scarbee A-200 and the Scarbee Clavinet, also exceptional...)...

The eldest modeling virtual electric piano hasn't stopped improving with every of its four versions. It offers, within a very nice interface, lots of parameters (less than Pianoteq but much more than sample-based products), processing options and effects that allow it to shift seamlessly from a clean Rhodes to a filthy Wurlitzer and everything in between. A reference you must try out due to its versatility and the beautiful personality of the modelings it offers.

Pianoteq owners can get this Rhodes for a very reasonable price, bundled together with a Wurlitzer. It is, without a doubt, one of the most impressive emulations on the market, and the one that offers more possibilities in terms of settings, given that it is based on physical modeling rather than sampling. With the Pro version you can manage the smallest details for every note and if that weren't enough, the developer made every effort to add an effects section worthy of their excellent product in a recent update. Fans of customization will appreciate it, as well as those looking for an ultra-responsive and dynamic Rhodes capable of handling complex interactions between notes: a definite advantage of modeling over sampling... You must test it.

Steinberg Neo Soul Keys $80 (based on HALion's engine; no eLicencer, no luck)

With a clear bet on character, Gospel Musicians' Neo Soul Keys are available in iOS format as well as for the three major samplers on the market, but all versions are oddly different. The Steinberg version using HALion's engine provides only a Rhodes MKI Suitcase, while the 3X version for Kontakt Free Player includes a Rhodes and a Wurlitzer, and the 5X version for UVI Engine features five instruments: the same as on the 3X, plus a Yamaha EX5 and a Dyno-My-Piano. A regrettable disparity between versions that nevertheless does not stop the instruments from being very interesting due to their ready-to-use big sound that can be easily made more filthy, just the way we like it — exactly the point where many competing products fail due to their very clean sound that demands to be really worked up at the output to get some grit and width…

Based around the same concept as Addictive Drums, Addictive Keys offers several meticulously sampled pianos accompanied with a series of effects and processing options that can provide the sweetest acoustic pianos with an impressive sound variety. A Rhodes is certainly included in the form of a Mark I going through a Musicman 112 RD Fifty 1x12" amp, all of which was recorded using different mics and in different positions, plus there is a DI take as well as one passed through a Chrorus Roland Dimension D. The result: seven perspectives and a myriad of possibilities that the included presets explore very appropriately.

Displaying a beautiful personality, this Addictive Rhodes lacks nevertheless a bit of punch on the attacks, which will be a deal-breaker for some. But the editing and processing options are such that the instrument remains the most versatile in this selection, and one of the most inspiring, maybe not for the soloist who might be more comfortable with a Scarbee, but for the producer/songwriter in the lookout for sounds that stimulate his creativity.

Sold at a significantly higher price than the rest, the main flaw of this instrument that offers three Rhodes and a Wurlitzer is that it is only available for Pro Tools, unfortunately. Otherwise, the A.I.R team did an excellent job developing good quality instruments (good sampling and good playing sensations) with character, as the 200 presets included attest.

Always ready to do the craziest things, Soniccouture distinguishes itself from the rest due to the originality of its products. Alongside a very meticulous traditional sampling (14 velocity levels, three round robin levels and three channels: line, amp and mic pointed at the hammers), the developer also offers a version of the instrument played with mallets, one with a pick and even one with a bow! The sound of all programs is excellent, including the SFX instrument that showcases the most bizarre sounds, crowning this bundle that costs only $129. A really unique product that deserves a chance, a guaranteed favorite!

The price might seem high at first glance, but if we consider that this Electric Keys not only offers electric pianos (including some rarities of the genre: Mark I, Mark II, Mark V, Rhodes Bass & Custom) but also organs, String Machines and even a Mellotron, there is no doubt that its 40GB of samples ought to be considered a serious option. Electric Keys provides very nice sound collections and Rhodes that remain very interesting even if they have to compete with UVI's Tines Anthology and others.

Like the Pianoteq and Lounge Lizard, small Italian developer GSI offers with Mr. Ray an excellent Rhodes Mark II modeling at a very accessible price. Don't get fooled by the GUI, which isn't up to the same standard as the instrument itself, and let your ears be the ones to judge the price/quality ratio of this plug-in that, despite some lack of lows, remains a very convincing option, especially due to its price.

Reproducing the sound of a 1979 Mark II, this Rhodes from French developer AcousticsampleS offers an excellent quality/price ratio if we consider the level of sampling detail and the UVI Engine scripts. With a very nice handling of key release and a quite comprehensive effects section, it is a very interesting option. 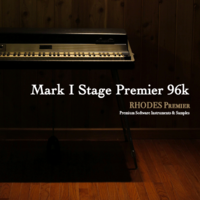 With 19 velocity levels recorded at 24/96 mono and no sample loops, the main argument of this Mark I is that it was fine-tuned by ear by the developers, who swear that they did not make any compromise in terms of quality. You must test it, especially considering that sample libraries in EXS24 format are very rare.

The Tines Anthology is well worth its name considering that it includes no less than eight Rhodes models: two Mark I ('74 and '78), one MK II, one MK III, one MK V, one MK VII, and even two Piano Bass (32-key electric pianos that were the ancestors of the Rhodes and were used, among others, by The Doors' Ray Manzarek). The sound is impeccable, plus every model has its own tremolo, spring reverb, chorus, and phaser as well as other effects and processing options. An instrument that couldn't be more complete and will surely seduce the most ambitious, especially considering that the price of the whole bundle is very reasonable.

Jeremy Ellis My Mark I

In spite of the fact that only the most detailed version has seven layers available, this Mark I remains an excellent option for Reason owners because it makes clever use of different effects of the sequencer via well-thought combinations. And for the price, you need to be crazy to deny yourself the pleasure.

Recorded through a Fender Twin, this Mark I plays the character card, and while it doesn't offer all the options other products do, it offers 16 velocity levels for the notes and release. One of the few to still offer something in Gigastudio format, which may be of interest to some.

For the price, it's hard too reproach anything to this small sample library that offers a sampled Mark II with 11 velocity levels and a nice effects section, complemented with a couple of in-house impulse responses.

With a proper but relatively little detailed (in comparison to competing products) sampling and a very basic effects section, the Rhodes in this Classic Electrics won't win fans solely based on its sound reproduction, but rather on a very distinctively advantage it provides with regard to its competitors: it ventures into arrangement. Included with the instrument, and with the possibility of completing it with different style packs, EZkeys offers hundreds of MIDI sequences recorded by real pianists that can be exported to be edited with your sequencer. As a consequence, those who aren't very comfortable playing keyboards but want to "rhodify" their songs ought to take a serious look at this software whose MIDI grooves, it must be added, can even be used with other libraries, at the cost of some velocity response settings of the latter. You've been warned…