Today we'll see how to create a percussive instrument from scratch using an acoustic take.

Sometimes, when you're mixing, you need to artificially make a drum kit element bigger to give it more fullness and/or punch. One of the most common techniques to achieve that is to add different layers of synthesized samples on top of the element in question and then mix these layers until you get the desired result. You can do that by hand, but depending on the DAW you use, it can prove extremely tedious. Another solution consists in using a "drum replacement" plug-in like Drumagog or Slate Digital Trigger. However, using such tools requires a good deal of know-how, not to mention the time it can take to find adequate samples.

But there's yet another way to do it that is just as effective, at least in my opinion. Plus, it's much faster and easier to put into practice and doesn't require any samples. And as you have surely guessed, this technique involves the use of a noise gate! 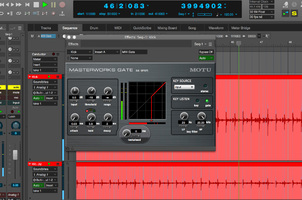 For the purposes of this article, we'll take a bass drum whose attack and body we want to bolster as example. To do that, you first need to duplicate the original track and insert a noise gate into it with the following settings: extremely short Attack and Release times, a fast Hold, and the Threshold set so that it picks the full sound of the beater. The resulting sound by itself won't be particularly musical but you'll get a sort of click, which together with the original track will add a nice definition to the kick. If the click lacks consistency due to the hits of the beater being unsteady, placing a compressor before the noise gate will solve the issue.

Now that you've gained some definition, it's time to focus on how to make the kick fatter. This time we'll use a synth sound. Any virtual synth capable of generating a sine wave will do. Make the VSTi play a continuous note in the low frequencies (between 40Hz and 50Hz) in tune with the song's key along the entire song. Now place a noise gate on the synth track and use the kick drum to trigger it. The Attack ought to be relatively short, but not too much in order to avoid clicks.

The Range parameter ought to be set to max to mute completely the sound of the synth when the kick is not being played. Finally, the Release time and Hold parameter ought to be set so as to emulate as much as possible the natural decline of the original kick. You should now be able to control the fatness of your kick by playing with the volume fader of the synth track you just created. But be careful not to overdo it or you risk making the trick audible. 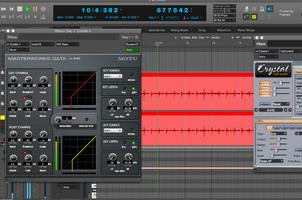 This technique isn't limited to processing kick drums, it can be used on most percussive elements, as long as you take into account a "small detail." While a sine wave in the low frequencies will do the trick with a kick drum, a snare, for instance, will require a different treatment. In this case, white noise filtered according to the timbre you are looking for will be more adequate. Unfortunately, there are no rules regarding the ideal sound for any given percussive element. Just remember that your goal is to improve the sound of a percussive instrument, so the tonal content ought to be as discreet as possible, in order to get results that sound natural to the ear.