In this installment I suggest yet another way to analyze your mix through the ears of other people. The principle this time is very simple: letting a bunch of people listen to your mix without them being aware of it.

Before getting into the heart of the matter, let's see what good it can be. Do you find it hard to give an honest opinion to someone close to you? You probably don't want to hurt the feelings of that person, especially if the object of your critique is very important to him or her, right? I think any human being with an ounce of empathy will answer these questions affirmatively. So, chances are that people who know in advance it's your work they are judging might hold back or feel uncomfortable expressing their opinion. It goes without saying that this isn't the best way to get honest, objective and constructive opinions. And since you are aware of this phenomenon, even if the listener manages to overcome these hindrances, you will nevertheless be unsure whether he/she really has done so and their will always be a shadow of a doubt lingering in your head when it comes to considering whether his/her comments are true and honest. Hence, the idea of having your audience listen to your mix without being aware of the fact doesn't seem that preposterous.

Now that we've agreed on the usefulness of this move, let's see how you should go about. At first glance it seems pretty easy to simply include the track in a playlist you'll be playing during an evening with some friends. But you shouldn't forget that your song hasn't been mastered yet! Which means that your experiment might backfire since the difference in perceived volume between your mix and the rest of the songs will be obvious and not favor your intentions. You could certainly pump up the volume when the time comes to listen to your track, but this has an element of randomness to it that it probably won't be entirely satisfactory. What I do is to prepare the playlist in advance so that the loudness of all tracks is similar to that of my own track. To achieve that I import all the tracks in the playlist into my DAW and adjust the gain of each of them according to what my ears tell me, with the help of a loudness analyzer plug-in like the free Youlean Loudness Meter. Once I'm done with that, I'm ready to rock! 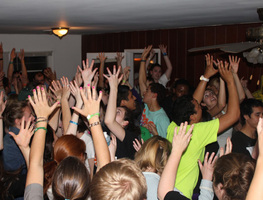 Now let's talk about how you should analyze the reactions of the people "blind" listening to your song. As weird as it might sound, the lack of reaction is one of the best signs. In fact, if your song doesn't interfere in the slightest with whatever is happening when it's playing it means that it is, at least, as good as the rest of the songs, both technically and artistically speaking. And it would be even better if your song actually contributes to improving the atmosphere! On the other hand, if your track somehow ruins the prevailing climate even though the playlist is coherent in this regard, or if it produces negative reactions or comments, like someone wanting to turn the music down to be able to chat better or because it's annoying, then you most probably have to review your work.

Before I finish, one last remark on something I haven't touched upon so far: It's very important for every budding audio engineer to be able to discriminate the comments concerning their own work and those concerning the song itself. It's very easy to blame the mix when probably the problem has to do with the composition. And the problem for home studio owners is that, most often than not, the audio engineer is also the songwriter... Who gets the blame in that case? That's not the question you want to ask yourself. Self-flagellation is not the best way to get things moving. Nevertheless, correctly identifying where the problem comes from will allow you to know where to tackle it, which is certainly way more productive, don't you think?